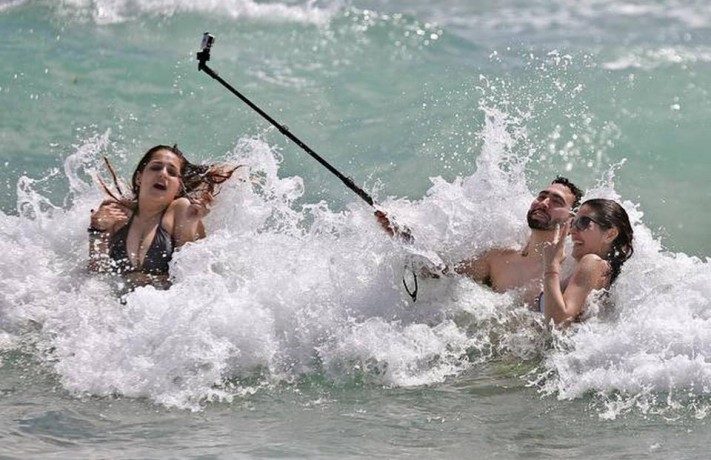 The world is changing like a newborn’s diaper – shit is moving fast. Every time I step outside my isolated country existence I experience culture shock. I feel like an unfrozen relic of the past, released into the world wearing clogs and a prairie dress, in search of an open fire with spit to roast my meat.

Last week The Munch and I went on a family vacation, but separately. I believe that is the best kind. Munch went to visit my friend Gita in NYC, and I was off finding my Zen on the azure ocean. I parked my car in New Haven and took the train into the city so I didn’t have to pay $9,000 for parking….which would actually be a pretty good deal for Manhattan.

When we got on the train in Connecticut, it was filled with people. We squeezed into a seat and settled in. I began staring at the hominids surrounding us, because that is depressingly REALLY exciting for me. I feel like anthropologist out in public or a space traveler. “There are others out there!” That was when I noticed that EVERY SINGLE PERSON WAS ON THEIR PHONE! Even the family across from us – a grandma, grandpa, and two grandkids – were ALL on staring into their iPhones.

It is not like I don’t also have a deeply meaningful relationship with my phone. I know it’s a problem. Yet living in nature and spending a lot of time in the car inherently means fewer opportunities both because I don’t want to die veering into an oncoming car while tweeting or because I’m outside a lot gazing at trees and shit.

I can see how the city life would facilitate more times to check your phone, but my train observation was disturbing none the less.

When I got to JFK for my flight, I found myself suddenly surrounded by drunk college kids. If you ever every want to question the direction of humanity and find yourself in a deep dark abyss of hate, I highly suggest going to the airport during the week of SRING BREAK!

Okay, fine Toni. I shouldn’t be such a judgmental curmudgeon about young people having some fun. That is until the self-sticks got broken out.

In case you have yet to experience or witness a selfie stick, it’s a stick that helps you take better selfies so your arm doesn’t look fat and ruin the picture. They were everywhere. The really weird part was how shamelessly everyone used them. They weren’t taking secret selfies in a room pretending a friend was there and just DYING to take a picture. They were brazenly using them in public. Like it was TOTALLY okay to be your own paparazzi.

I was in another country, not only taking a vacation from life but also from my phone. I kept my phone off out of fear of getting charged a gagillion dollars for international texts. In retrospect, the break from my phone was one of the best parts of my time away. It forced me to be in the moment. I took long walks on the beach, soaked in the sun and connected to the sounds of the ocean waves but seriously, everyone on the beach was looking at a screen. It was staggering. The selfie stick followed me throughout the week, as people documented themselves rather than the beauty around them.

I am not being self-righteous, okay! I am not perfect and have an obsession with my phone too. But you guys, we have to keep each other accountable. We need phone curfews. Or time limits. We need an app that says “get off your fucking phone and look up!”

When Munch and I took the train back to New Haven, once again we were the only people not looking at our phones. Not to say we don’t have our battles with “screen time” because we do, but the train is still exciting for us. Munch was looking out the window and playing with Alpaca erasers that Gita had given her. She made up songs and occasionally made me play big sister who won’t let the pink Alpaca wear the princess dress and wants to eat all the chocolate (a pretty awesome game, I might add). A woman walked by us and said “wow, she has such an active imagination!” I wanted to fucking weep. Isn’t this what childhood is supposed to be? When we pacify our kids with media to prevent boredom, they don’t have to work their brains to make up insane Alpaca eraser games.

The Alpacas got us talking about the animal kingdom.

Munch: Can we go see some dinosaurs next time we go to New York City?
Toni: Munch, dinosaurs are extinct.
Munch: What does extinct mean?
Toni: It means there are no more left. They all died.
Munch: Are other animals extinct?
Toni: Yes. A lot. And more animals become extinct every day.
Munch: Why?
Toni: Because people are cutting down the forests, and the animals get killed.
Munch: Why would any one do that?! WHY WOULD ANY ONE KILL ANIMALS!
Toni: Because they want to sell the wood for money. OR they want to graze cows for money? Basically to make money.
Munch: The ANIMALS LIVE IN THE FOREST! What can we do to stop them?
Toni: I don’t know.
Munch: We have to call the police. And the police would stop all the bad people from killing the animals!!!!
Toni: That is a really good plan.
Munch: How many animals are left? How many leopards are left?
Toni: I don’t know… maybe a few thousand?
Munch: WHY ARE THE PEOPLE KILLING THE ANIMALS!?

A man that was sitting behind us then interrupted our conversation.

Man: There are actually 34 leopards left in the wild. I am sorry to bother you, but I was eavesdropping and then had to know how many were actually left.
Toni: Thank god you had your phone and stopped me from spreading disinformation to my child.
Munch: 34 is way less than thousands mom.