You know how chicks rely on purses, belts and heels to sass up their look and make them more look feminine?  Well guys have their own version of accessorizing to make them look manlier, and it is usually a scantily dressed bird.  Nothing says I am a stud more than a slender dame with her tits hanging out draped on your arm.  But you have to hold her up! She is hungry and her feet hurt from her shoes!

But this is nothing new.  It is such an old paradigm that I am sure there are cave paintings of Cog and his lady friend Mwanpa in a semi-upright position, with her beard in braids wearing a risqué rock bra trying to look sexy.  Women play into this convention just as much as men want them to because being valued for our beauty gives us a sense of worth.  That is why there are so many willing participants in the media who will gladly display their bodies as decorations when men need them to look virile.

Lets take for example, music videos.  A babe on set is the ultimate garnish to make you look cool.  Sometimes it is her whole body, and sometimes-just parts of her body like in “Baby’s Got Back” – a video with giant butt sculptures for the guys to sit on.  I don’t really have a problem with this, but you would never see a video with girls squatting over a giant set of balls rapping about wanting testicles to be large and ploppy.  Although I welcome the sentiment of appreciating a full figured woman, there is a double standard that always exists when it comes to the objectification of the female body compared to the man’s.  Maybe that is because a man’s crotch looks like the elephant man’s face… but still.

But I have come to accept this as relatively commonplace, and usually try and enjoy things for what they are.  The classic scenario of a man singing a long to his song, while birds wiggle around and shake their hips too and fro in somewhat consistency of the beat.  Pretty standard recipe I thought… until I saw THIS VIDEO by with Robin Thick, Pharrell, and TI.

So you know that saying “half-naked” women, and how it usually refers to skirts who are wearing few clothes?  Yeah, so these Betties are literally half naked.  They are wearing nude thongs, weird nurse-friendly sneakers, and nothing else.  Their bare bosoms are flopping around and jiggling – reverberating with every step they take.

This is really the weirdest video ever.  At fist I was like “is this an ironic statement??”  Having the men be fully dressed in suits as the women parade around with their areolas exposed to the elements?   But then there was one girl who was dry humping a taxidermy dog, while another cradled a lamb and I thought “no… I think they are serious.”

At one point “Robin Thick has a big dick” is spelled out in silver balloons prompting me to think, “oh this has to be a fucking joke…” But then the chorus drops in saying “I know you want it” over and over- that coupled with a scene of a girl’s bare ass with a flag sticking out that read STOP made me feel like things were getting kind of rapey.  This was only further inflamed by the lyric “try to domesticate you, but you’re an animal” where a girl is all fours thrusting while another girl has her foot on her ass like she has just conquered her.

I mean, this is taking the whole hot chick in my video idea to a new level.  I want to think this is a spoof.  Or at least an intentional commentary rather than an actual attempt of making something you want people to take seriously.  But I really can’t tell.  And you know what? The girls bobbing around with no tops on sort of look silly!  Like they would be sexier if there was some mystique to their outfits. 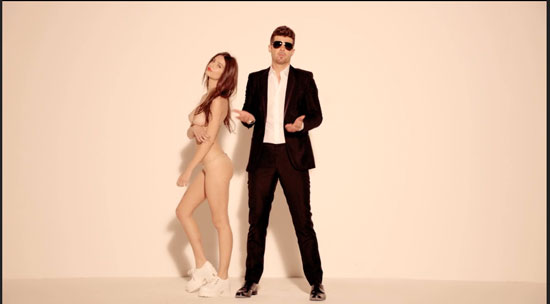 Previous post:
I Want To Be With you… and Eat You Next Post:
Parents Can Be Really Annoying