Whoops… Are You Going To Die? 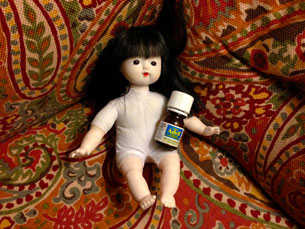 “Mamma I drank the medicine” is not exactly what you want to hear on a Sunday morning.  Mostly because I had a flashback of five minutes earlier when I saw The Munch walking around with a baby syringe.  Riiiiiiigggghhhhttttt.  So that is what she was getting into.

“Munch, you drank the medicine, can you show me?”

Sure enough the entire bottle of Baby Advil was gone.  Now here is where a lot of the details get fuzzy.  How did she open the bottle? Aren’t they child proof? Technically yes.  But this bottle had been strewn in drawer and a lot of the medicine had coagulated and congealed.  So I guess she just could pull the top off? Or perhaps my cat is a drug pusher?

“Munch how much of the medicine did you drink?”

Okay, so that was kind of hard to keep a straight face at.  Especially considering her maniacal demeanor and the fact she was giggling like Cheech and Chong talking to the cops.

“Munch, are you high?” How much of the medicine did you drink? A big sip or a little one?”

Then she proceeded to run around the house like her diaper was on fire, yelling and laughing Jim Morrison style.  In the midst of this display, my friend and I were trying to decide what to do about it, and if I should be worried.

“Well, it is only infant Advil so I don’t think she is going to go into a coma.”

“Wow, thanks.  Hadn’t even thought of her going into a coma until now.”

Then another friend called and suggested I call the company, and in the meantime give her milk and bread to absorb it.

“Munch, do you want some milk and bread?”

“I want milk in my bread Mamma!”

“Ooooookkkkkaaaaayyyy.”  But I only had moldy bread, which of course she grabbed out of my hand before I could tear off all the green parts and ran like a wild horse stuffing it in her mouth.

As my friend heard all this she reminded me that at least with the moldy bread she was getting penicillin, so that made me realize what I good mom I really am.

I called the 1-800 number and they were only open Monday through Friday, so I figured most people didn’t poison themselves on the weekend so we were probably okay.  It was hard for me to know what to do because Munch was having the time of her life.  She was like living the Van Halen dream.

I tried to calm her down, and put her at the table to eat some things that weren’t rotting.  While I was cutting her pear she threw my glass bowl on the floor, which obviously shattered.

“I wanted to bounce it Mamma.” This oddly made sense to me.

To distract The Munch while I cleaned the 120,000 shards, I gave her the lotion she had been demanding to play with.  Not the best toy, I concur, but she wanted to squeeze the “creamy creamy.”

“Oh dear Munch, that is really gross, you need to wash your hands.”

I put her by the sink and was wiping up the clumps of white gooey lotion from the table, and when I looked at my child, I saw that she had created a soapy concoction mixed with lotion, chewed up pear, and water that she was dipping her bread into and eating happily.

What the heck do they put in Baby Advil?  Because I need to get me some of that!

(Notice the moldy bread in mouth and glazed over eyes.  This kid knows how to party!) 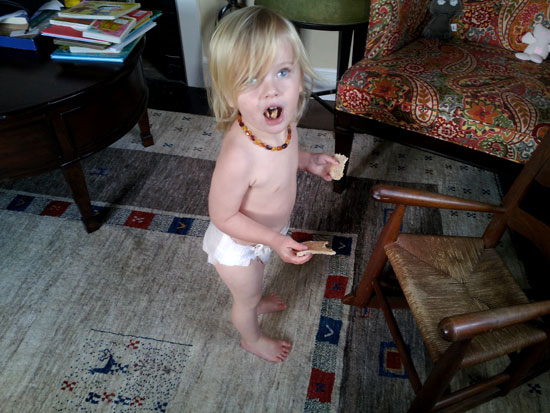 Previous post:
Too Much of A Good Thing is A Bad Thing Next Post:
Restoring My Faith in Humanity