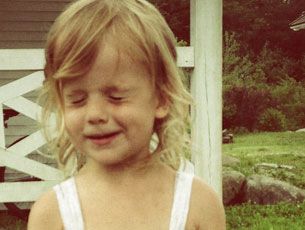 Children are very impressionable beings.  They are like little sponges, soaking up information, and smelling like mildew.  They watch everyone around them, and are influenced deeply by the behavior that they are exposed to.  Kids are still forming their personalities and interests, and are susceptible to a variety of stimuli.  And that is exactly why sending The Munch off to school terrifies me.

I mean it could be way worse.  We live in the cuntree and The Munch goes to a sweet school where they give pinecones gender-neutral names, and make moss-flavored millet bread.  All these kids are pretty sheltered and non-threatening.  It is not like at my Montessori school that I went to in Boston where a little girl told me I was adopted and my parents didn’t love me, and some boy tried to finger-bang me while I was wearing a skirt and he was lying on the floor beneath me pretending to nap.  The Munch’s life seems way more innocent than that.  But I still have a lot of fear of how deeply she will be impacted by the kids around her and wanting to fit in and make friends.

When I pick up The Munch from school I have these glimpses to observe how she relates to other kids, and how those kids relate to each other.  The Munch is about a year and a half younger than her best friend Hazel, and all the other girls about two years older.  So she is definitely the baby of the girls, and that really freaks me out.  I remember how much I looked up to older girls when I was young, and how I wanted to be just like them.

As I watch these kids it is almost like they try on different ways of being, like coats.  One little girl will have her hand on her hip and tell another she is not talking to her now.  Then that little girl will do the same thing to another kid.  They aren’t great thespians yet, so it is still pretty obvious and easy to distinguish between kids being their authentic selves, and when they are imitating behavior they have witnessed.  You can see them acting out something they saw, and then figuring out if it works for them, or how good it feels.  They may not like the feeling of being rejected, but enjoy the power of rejecting someone else.

As we age we imitate and copy less, but there are still many ways we are influenced by each other – it is just subtler.  Even though I think I know myself and have a strong personality, I am still mutable.  I am slightly different around every person I am with, and also pick up on the ways of my friends.  It is not like I am a rigid being who is the same around everyone, but I am porous and allow the different energies to seep in and out.

I can’t stop The Munch from being swayed by the kids around her, although maybe I wish I could have kept her in a box and delayed it.  But this is an inevitable consequence of socialization and living in a community.  It was bound to happen at some point, so I guess now is as good a time as any. Even if she wasn’t at school The Munch would still be exposed to some shit.

The other day at the park there were these two little girls playing, and one of them grabbed a stick and pretended she had a dick and was pissing with it.  Then the other little girl started grabbing it, and they were both pulling at the dick. They then started making farting noises, bumping their rear ends, and pretending to fart into each other’s butts. You know I am all for some good fart and dick jokes, but then they started wrestling hard core, and one of them pinned the other and started looking down her pants.  And Munch was watching the whole thing saying “aren’t they funny Mamma?”

The only thing I can do is talk to her about what she sees and analyze it together.  If we witness a kid acting out, we discuss it.  How the kid may have felt, how their mommy felt, and how she felt about seeing it.  I also try to notice when The Munch is acting like someone else and call her on it.  I tell her I know that she saw little Brian spitting, but that doesn’t mean that it is okay for her to do it.

In the end I guess the truth is that we are the company we keep, so maybe the best strategy for parenting is the classic “raised by pack of wolves.” 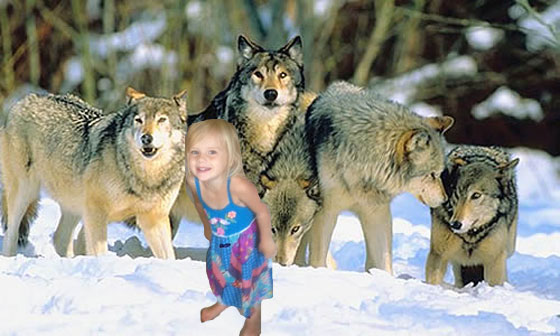 Previous post:
School Is Ruining My Life! Next Post:
Are You Put On This Planet To Break Me?