Would You Send Your Teenage Daughter To a Place Called “Camp Commando” in the Transylvanian Alps? 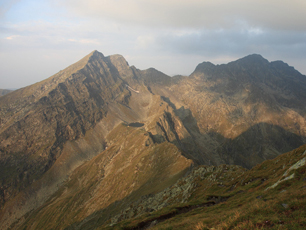 The summer I turned 14, my parents basically said “get the fuck away from us.” Maybe they were a little subtler than that. They were actually like “how about you go away for a while Toni. Thanks.”

My mom and dad suggested that my cousin Marta and I attend a language immersion program in Hungary to connect to our Magyar roots. When I shared this plan with my best friend Bitty, she made it clear we were not spending the summer apart and invited herself along.

The three of us were excited to go to Europe, but not for the reasons our parents might have hoped. We were excited to drink beer. Learning Hungarian wasn’t exactly a top priority. The language program was two weeks long. I guess my parents wanted more time away from me and came up with the brilliant idea to extend our stay by sending us to a camp in Romania.

I’m not sure what possessed my parents to send three 14-year old girls to “Camp Commando,”  deep in the Transylvanian Alps, but evidently we were sufficiently annoying and got shipped off.

After two weeks  in Hungary, we started to wonder why the fuck we were going to Romania.

Marta: Why are we going to go to the Transylvanian Alps again?

Toni: I thought you wanted to go? That’s what my parents told me.

Marta: What? I never wanted to go to Romania! My parents said it was Bitty’s idea  since this is her first time in Europe.

We both looked at Bitty accusingly.

Bitty: That is a total lie! My parents told me you guys wanted to go to Romania. I had never heard of Romania before this trip!

Toni: Holy fuck. I think we were just conned by our parents.

Yeah, all our parents lied to us by insisting it was the “other girls” who wanted to go.  Well played.

I decided to call my dad and calmly inform him we were not going to Camp Commando. We’d be staying in Budapest, getting wasted, and flirting with boys. Completely confident with my reasoning, I called my parents. Five minutes later tears cascaded down my face as I cried hysterically on the phone with my father. Thankfully a compassionate old women walking by handed me a tissue.

Toni: But Dad! We don’t wanna go to Romania. Nobody ever did. Why can’t we just stay here?

My Dad: Toni, if you know what is good for you, you will be on that bus to Romania tomorrow and on your way to Camp Commando. If not, you will regret this for the rest of your life.

And then my calling card ran out.

The next day we tearfully dragged our suitcases, as we searched for the bus to Camp Commando. It became painfully obvious that we were not only lost, but had too many bags.

Bitty: What if we never find it? Will they ever know? Can we just pretend we went?

Marta: I don’t know. I really think we are near. Probably just a few more blocks.

Sigh… Marta was a good girl and did not want to get in trouble. Ten minutes later we rounded the corner and saw the Camp Commando bus. As we boarded, we noticed the bus was packed – clearly everyone had been waiting for us. We made our way back to sit down when a woman loudly asked for the “American girls.” We were taken off the bus, into a building, and marched up 18 flights of stairs. Then they brought me into a room with a phone and pointed to it.

Bitty: I think you have a phone call.

I was seriously confused as to who could be on the line.

My Dad: Toni, if you ever want to see the light of day again, you better be getting on that goddamn bus to Camp Commando.

I hung up totally angrily. On our three-day bus trip into the Romanian Alps, we learned a lot of things. We learned that everyone else had brought their own food and water.We also learned what it was like to sleep in an orphanage. Nobody spoke a word of English, nor did they notice when the bus left Marta and I  in the middle of the Romanian Countryside, where we stopped to relieve ourselves.

Once we reached the base of the mountain, we had the unique privilege of being passengers in an actual concentration camp bus left over from WWII. For the entire six hour trip, we straddled the benches with a stranger between our legs and nestled between the legs of another stranger who was pressed against our backs while everyone around us sang Romanian folk songs. Once we reached the camp, we realized this little bus was not the only group of people who were going to Camp Commando. 60 Romanian boys were on board for soccer camp.

The clothes we brought were appropriate for scampering around the beaches in Hungary, but far less than ideal for life in the Alps. At night, we all slept in one single bed to keep warm, taking turns being sandwiched by feet as that was the only way we could all fit. The shower at Camp Commando consisted of a hose that came out of the wall in the bathroom and only had hot water for one hour a day. Of course this magical hour changed daily and we never knew when that was because we didn’t SPEAK FUCKING Romanian. There was no toilette paper, so we resorted to using stale bread leftover from breakfast or the paper that the Romanian boys wrote their addresses on.

Every night, dinner consisted of a circle of unidentified canned meat on more stale bread. To deal with our incessant hunger, we played card games with some of the boys in exchange for cheese. I never understood the rules of the game, but figured out pretty quick how to cheat. Once I even won a bottle of Cherry Coke from a 6-year old.

I’m not sure what we actually did at the camp. Most of the time we had no idea what was going on, and got left behind, BECAUSE WE DIDN’T FUCKING SPEAK ROMANIAN. We did have a Romanian language lesson one day and learned a song about a bird, and another one about people with black eyes. The teacher found this song hilarious  because who has black eyes?

We were totally stranded. These were the barbaric pre-internet days!  There was no way to call our parents, no way to hike out, we were stuck.  After 13 had passed (and I know this because I counted the notches of crust that had formed in my underwear) a new Hungarian teacher came to the soccer fields at Camp Commando.  By the grace of the universe, I was able to convince him in broken Hungarian and inappropriate hand gestures that he had to get us the fuck out of there. We devised a plan that he would come for us that night at 4 am and take us down into the town.

Bitty and I were too afraid to sleep in case we missed our escape time to meet this mysterious man, so we stayed up while Marta took a nap. Two of the boys randomly showed up and brought us to a cabin outside the Camp, deep into the woods where an old man lived by himself. He sat by a fire, frying pork fat. That was the first time I had ever seen anyone flip their eyelids, and although retrospectively I can appreciate he was trying to entertain us, no human should ever see the inside of another human’s eyelids. At 3:30 we bid them goodbye, took the addresses of the boys in case we needed toilette paper, and then woke up Marta.  We dragged our suitcases to the secret spot, and thanked the heavens above that our savior, the teacher was already there, smoking a cigarette and waiting.

We got in his car, each took one of his smokes, and spent the rest of the two hour drive trying to recover from the strength of the Romanian cigarette. Once in town, he brought us to his house, gave us a loaf of bread, a wheel of soft cheese, and drove us to the bus station. I don’t know who this man was, but I still worship him for his kindness from time to time. After two and a half days on a Romanian bus, we arrived in Budapest. Back at the youth hostel, we pulled straws for showers. Bitty won.

Marta: So go! There is a bathroom with actual toilet paper right there!

Toni: Yeah, but Bitty’s in the shower. I don’t wanna ruin it for her. I’ll just go off the balcony.

I then preceded to precariously perched myself on the side of the railing, my butt hanging off the metal bars, while Marta watched me poop, 30 feet above an abandoned courtyard below. I knew at that moment, we were finally women.

(Here I am passed out in Hungary…) 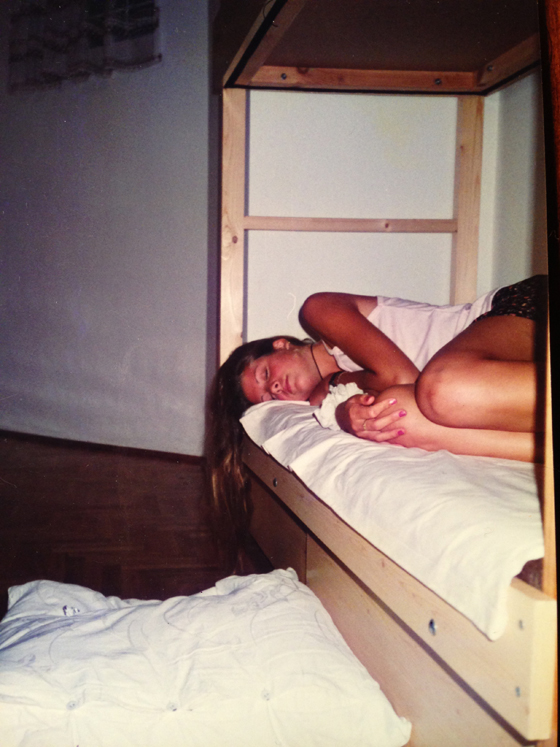 Previous post:
I Am Pretty Sure That Being a Mom Is Not The “World’s Toughest Job” Next Post:
We Are All Just Big Babies Raising Babies