Who Puts the “Just” in our Justice System? 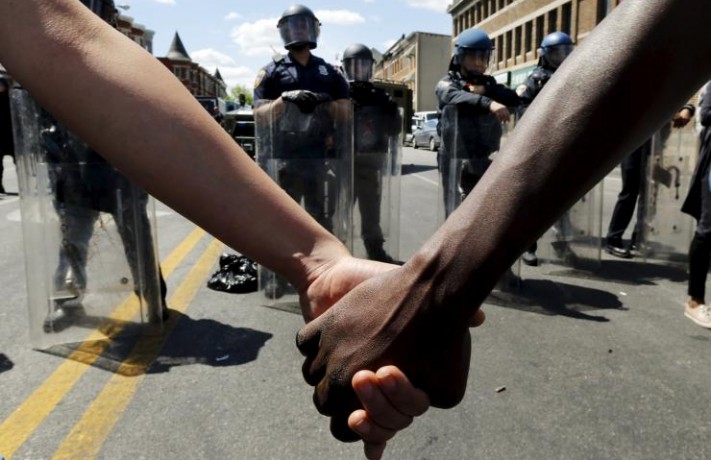 Say you are driving in your car, listening to music, eating a sandwich, talking to yourself about how you’re never going to amount to anything of significance and will probably wallow in a pit of mediocrity for the rest of your existence… whatever. Point is that you are doing nothing wrong, but suddenly a cop pulls out behind you. Now every time you look in your rearview mirror you see those lights perched on top of the vehicle like crocodile eyes. Do you feel safe? Protected by its presence? Or do you feel fucking terrified and wonder if you are going to get pulled over?

It doesn’t matter what I am doing in life, if I see a policeman, my first instinct is to tense up. I’m scared of their power – of their ability to take me away at any moment. This fear is not because I think every cop is evil or corrupt, but it’s the system itself I don’t trust.

The concept of a police force, and of a court of law, came from an effort to relieve ourselves from the personal accountability of maintaining justice. There was a time in human history when there was no organized method. We took justice into our own hands. If you killed my brother, I killed your son. Then your nephew would kill my daughter, and my cousin would kill your favorite cousin. That was how we righted wrongs. We just retaliated as vigilantes of our families.

The famous Greek Trilogy, The Oresteia, written by Aeschylus, is tragedy about the house of Atreus, where the son Orestes sets out to avenge his father’s murder. Basically it is a story of two families who keep killing each other through generations of vengeance. A cycle of killing is formed because each murder is justified by the murder before. The story ends with the installing of the justice system in order to create a structure that rights wrongs, rather than leaving it in the hands of the people.

For modern people, instead of having the social or personal expectation to vindicate your slaughtered loved one – an outside system would serve as that role.

So for the last 2,500+ years, Western culture has surrendered the idea that we are individually responsible for revenge. If you killed my brother I would be SUPER sad, but I wouldn’t hunt you down and then stab you in the heart while I stared into your eyes as your last breath gurgled out of your disintegrating body then licked your tears of blood. I would instead hope the police found you, you went to trial, and 12 of my peers would convict you.

This system has allowed us to have a much different relationship to our humanity. The pressure isn’t on me, and I don’t have to be hardened by having to slaughter anyone. I can stay protected from having to enact violence by trusting in this organization that was ideally designed to represent justice for all.

Even thought the Ancient Greeks spent a little too much time dry humping little boys, they are the fathers of modern democracy and our political configuration. The fact that we are currently in a state where we feel such little trust for these systems is relevant.

When I hear solutions like “the police should all have cameras on their uniforms” my first reaction isn’t a sigh of relief, but rather wondering how easily that footage could be manipulated. Or how in poorer districts the equipment would be too faulty because of lack of funding. All I can think of is how if we have the illusion of accountability, we ourselves will be less accountable. The fact that citizens make the risky effort to film police wrongdoings with their camera phones is probably one of the most profound advantages of technology in the last 50 years – that and the ability to share this content on the Internet.

There are still many examples where cops can murder an unarmed black man in broad daylight, and, if someone films it, they still get acquitted. However, the national anger and commitment to be heard is having an impact. The more we keep filming, keep talking, keep incessantly sharing, keep organizing dissent, there will be more instances of culpability. Where justice is actually served.

We are kind of back where we started in the times of the Oresteia. For so long we felt unburdened to maintain justice, yet here we are, again we are responsible. Yet the difference is that the strategy has evolved. The answer isn’t as simplistic as kill me and I’ll kill you back, but rather acknowledging that we as a collective have to uphold the systems that we have put in place. 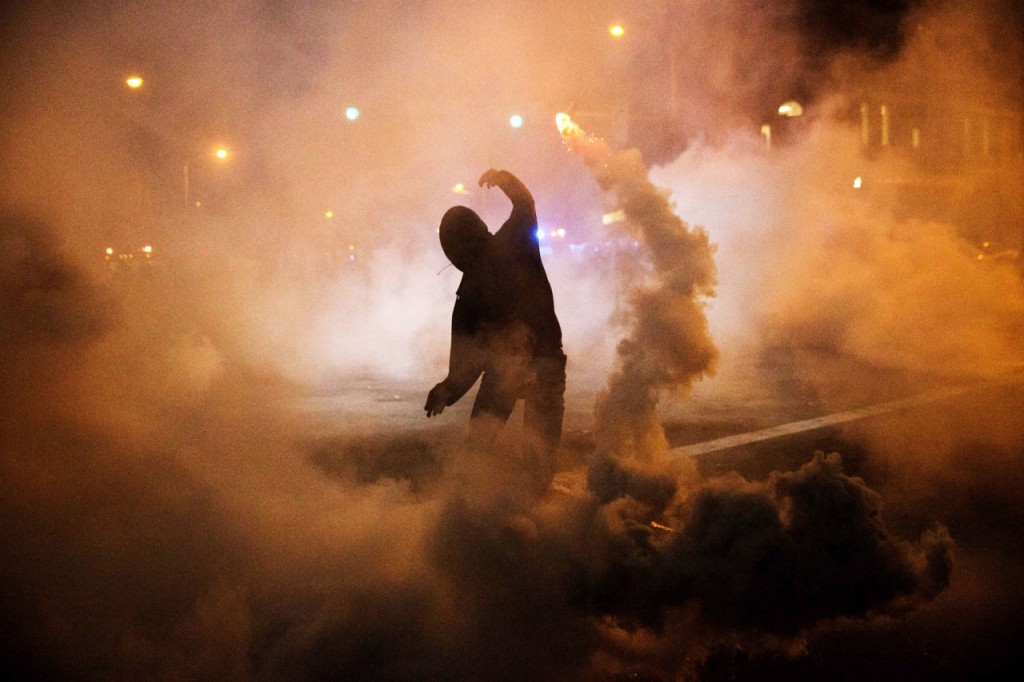 A protester throws a tear gas canister back toward riot police after a 10 p.m. curfew went into effect in the wake of Monday’s riots following the funeral for Freddie Gray, Tuesday, April 28, 2015, in Baltimore. (AP Photo/David Goldman)