Where Do Babies Come From?? 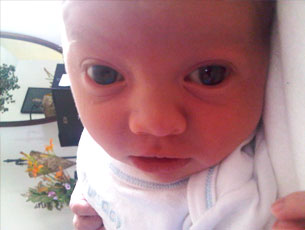 Technically, I know where babies come from. Sort of. I mean, I have a vague idea of what happens from 8th grade science class, and diagrams on the internet of a tadpole like creatures turning into a baby. You know… if you think about it from an evolutionary standpoint (assuming you believe in that sort of thing) the human gestation period mimics the evolution of life on the planet. A primitive single cell organism (sperm) that develops into an amphibian with a tail, and then eventually a mammal. Crazy town!

So yes, there is a rational, scientific explanation of where babies come from… but that does not satisfy my genuine intrigue of how this all happens. There is such magic and mystery to how one day you are suddenly hosting a life… a life that develops completely without any conscious effort. It is not like you sit around being like “okay body, now its time to create the ears.” All this happens without any deliberate effort on your part. You just have to do is ride the wave of the experience.

Having a baby connects you to questioning the impetus of life, period. Life as meta concept. How was life created? How do you get from life not existing, to suddenly just being? Is life eternal? Has it always existed? If so, has the baby always existed? If yes, then where? Another dimension? What is that spark? The initiation that creates life? I feel now more than ever the vast unanswerable wonderment of it all.

I was once watching the discovery channel, and it was talking about how all the building blocks of life, the hard elements that comprise every living being on the planet, are the same as the insides of stars. So the theory was that the implosion of stars, and the stardust falling to the earth, was what ignited life to be possible. Isn’t that the most breathtaking thing you have ever heard? That we are children from the stars!

When I look at this newborn baby, I think I can totally see that, because she does kinda look like an alien ;o)