The Solution for Lonely White Men to Be Less Lonely 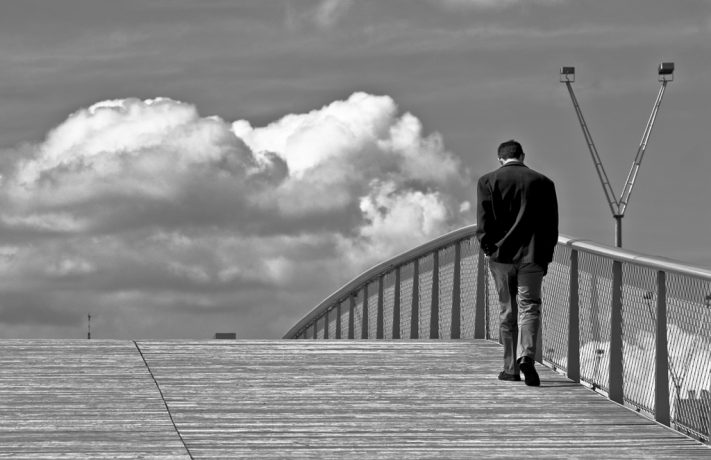 The plight of lonely white men is a cry heard from a thousand rooftops across the country – like a barking baby seal, yapping it’s discontent with a piercing echoing sound that penetrates the eardrum, rousing my auditory cavity with both irritation and empathy. I feel for this archetype of the lonely white male because he comes to his pain honestly. In this hyper-capitalist patriarchal world, if you were to win the genetic lottery of being a man, and white, you’re basically born on 3rd base of the playing field of life. So when white women born on 1st base, or people of color born in the dugout, or immigrants born in the goddamn parking lot surpass you in economic or social success – dashing by you as they round the bases for a home run – the failure feels extra potent.

As a woman, if I’m an economic failure it’s not THAT big of a deal for me psychologically because the game is already rigged against me. It’s considered cute that I tried so hard. The inbred sexism that is still alive and well in not only the work force but society at large gives me a rational explanation for why I’m not thriving. Sure sometimes institutions need a token female to float around in their sea of men, (and in that way being a female can be an extra advantage), yet even when you’re used as a tool for diversity, it’s still a lot of work to hammer your way in.

Being a white male is a lot of pressure, and being a white male that feels like you’re drowning despite your life-vest being secured tightly, probably is particularly depressing. I can see how this would ignite disdain towards those that don’t directly benefit from the patriarchy as a mask to hide the shame. It makes sense that there is an unconscious rage brewing that’s being externalized because the internal anger at the self is too much to contain. There is a cause behind this movement of men that feel victimized, marginalized, and discarded in this “politically-correct, post-modern, over-sensitive world.” Yet men feeling the oppression of problems caused by other men, then blaming it on “feminism,” or “reverse racism,” is divisive thinking that only empowers “the 1% man” that’s actually eating us all for dinner.

The loneliness of white men is often attributed to a lack of connection. Many men find themselves socially isolated and lack opportunities for deep emotional bonding. When looking at the psychology of these mass shooters, loneliness is often mentioned as one of the causes for this kind of extreme erratic behavior. This lonely, lone wolf that lacks connection to the pack, so their solution is to murder a bunch of people to feel less alone in their pain. Of course not every lonely white man becomes a mass murder, some of them fill their time calling women “cunts” on the Internet, so… it’s a spectrum.

This feeling of loneliness and emotional isolation for white men is spreading with the tenacity of HPV. They often have a reaction against “politically correct” culture because they feel personally attacked. Women and people of color yammering on about the patriarchy seem like a direct insult rather than a plea for alternative structural systems that aren’t so one-sided. Rather than acknowledging the imbalance of how society has been set up for thousands of years and listening to the experiences of how others have coped, they shun those conversations in fear of being blamed.

Yet the irony of this situation is that the solution to this loneliness white men feel that makes them feel so closed off is actually right under their noses.

When I listen to men talk to men, they tend to discuss common interests. They find topics they have opinions about, and then stay in that safe space of conversation. When you listen to women talk to each other, they tend to talk more about their lives and how they feel about different events that happen to them. When I hang out with my best friends most of our time is spent catching each other up on all the things that happened since the last time I saw them. So rather than expecting men to get all their emotional needs met by their friendships with other men, what if men had more female friends that were purely platonic (ie not trying to fuck) to help them better connect to their emotional selves?

The not trying to fuck these women is the KEY ingredient to this dynamic being successful. Women – much like bloodhounds – have a keen sense of smell and are aware when they’re being hunted. If I know a dude is talking to me purely because he’s trying to nose dive into my muff, I tend to be a bit guarded. Yet if I’m having a conversation and don’t feel mentally undressed and choked lightly while being pushed against a wall, I might open up more! The beauty of male/female friendships is that lonely men can then not only get better acquainted with their own feelings, but they could also learn more about what women think.

Men often don’t read books written by women or with women protagonists. Men don’t watch movies about women (unless a woman dragged him there and there is a potential blow job on the line). Men mostly don’t listen to Podcasts hosted by women. Men are not forced to take gender studies classes, or feminist theory – they would have to choose to have curiosity about these subjects and pursue it on their own accord. We often hear men complain that they “don’t understand women” or that ladies are “too complicated, “ with all our uterine undulations and random leaking of tears and blood. Yet women are no more complex or emotional than men, women just have had greater exposure to the psychology of men, and therefore understand them better. By simply going through the educational system and living life women are accustomed to reading books by men about men, watching movies made by men about men, and digesting the entire human history almost exclusively through the eyes of men because women weren’t educated and considered property for the last few millennia. Men don’t have the reputation that women do of being “complicated” but that’s not because they are truly any simpler. I don’t find men that mysterious not because they’re not multifaceted creatures, but because I’ve been constantly exposed to their thinking for all my years on this planet.

If men had more female friendships that highlighted the humanity of the women and not their sexuality, they would benefit greatly from the wisdom women have – not only about other women and how to be more appealing to them, but also around the female perspective of life. The more men are empathetic, understanding, and aware of the feminine experience, the more they will actually come to learn about themselves, their mothers, and the world around them. The female voice may have been silenced in most of recorded history, but the influence was always there. Why do you think the calendar is marking the months connected to moon cycles – because periods that’s why! Men that have a heightened awareness of the plight of women will actually better understand their own plight in the end. Women have so much to offer men intellectually, spiritually, emotionally, yet when they are treated purely as receptacles for sperm deposits, all that potential personal growth is lost.

So my advice to all the lonely white men struggling to find emotional peace in this world is to make more lady friends that you’re not trying to finger bang and instead use those hands of yours to learn to massage feet, braid hair, cook better, hug, and tear down the patriarchy one brick at a time with the rest of us. 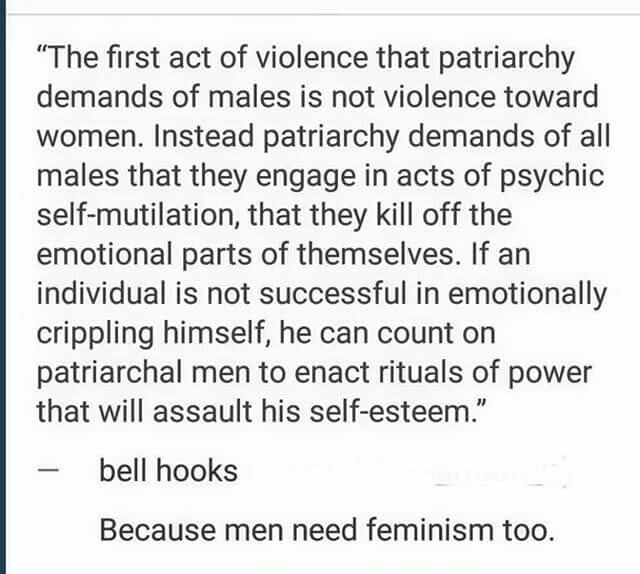 Previous post:
Bras, Boobs, and the Truth About Victoria’s Secret Next Post:
The Real-Estate Agent In Your Brain (Renting Out Your Depression and Anxiety Apartments)