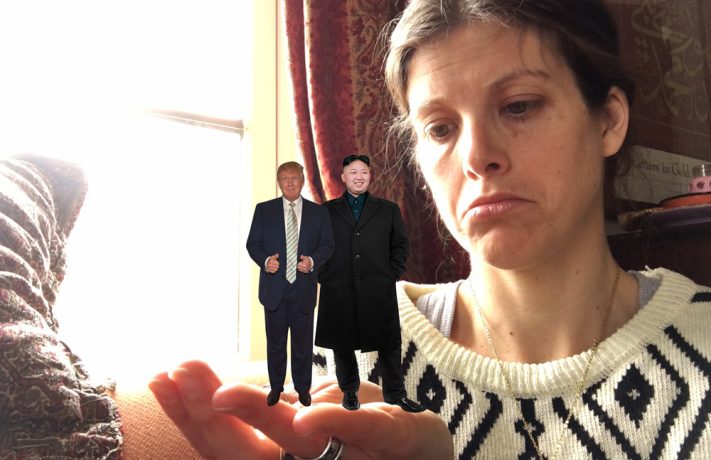 I don’t think it takes a rocket scientist, a brain surgeon, or even someone who knows how to toast a waffle to recognize the ego battle between US President Donald Tr… excuse me I just gagged a little… Donald Trump and North Korean Prime Minster Kim Jong-Un. So much of our current foreign policy seems to be a theatric display of men playing Star Wars, using their dicks as lightsabers, and the world as their playground for destruction. I don’t know about you guys, but I’m not ready to die because of the massive ego of a small-handed man. Even though the Trump regime is trying to make us fear North Korea, the real person to fear is Trump, his volatile personality, and irrational taunting. In truth, the world is and should be much more afraid of America than we should be afraid of the rest of the world, because so far, we’re the only one’s who have ever dropped nuclear weapons. SAD!

The US has been at war for 224 years since the “birth” of the country in 1776.That means we’ve only been a peaceful nation for 17 years? How is this okay? Where wars waged mostly by men are the ruling influence on the planet? Yes of course there is profit to war. Yes there are resources to exploit. Yes there are colonies to be made. Yes there is this constant pursuit of power – but WHY? Why is this a world of competition not cooperation? Isn’t it so dreadfully clear that this psychology is vastly destructive? Even though women are a part of the military and a part of the political system, it is clear that the majority of our war mongering history has been initiated by men. What is the root behind all the violence?

Is Donald Trump’s ego the ultimate manifestation of the male ego that’s been in power for the last couple of millennia?

The fragile male ego is perhaps the most elusive force on the planet. It has a mysterious power unbeknownst to even the most learned astrophysicist. More prevalent than dark matter, and beholds a powerful vacuum that rivals the black hole in the center of our galaxy. It has taken over the planet, and all of humanity bows to its glory. The male ego is the driving force of our economic system, political system, and even the solar system.

That isn’t to say that ladies don’t have egos. Ohhhhh we do. Of course we do. But the lady ego is not in power. If the lady ego were the standard, we would be competing about who has the most beautiful gardens/national parks, which army’s outfits fit the best, and who hosted the most delicious country-wide bake sale. Maybe there would be some disagreements regarding who is the most popular dictator, but we would deal with that by gossiping behind each other’s backs… NOT BLOWING PEOPLE UP WITH NUCLEAR MISSILES!!!!!!!!!

Come to think of it, would the lady ego have even developed the nuclear bomb? I THINK NOT! Perhaps a cosmic clam but it would simply be cozy place to store our enemies while we taunted them by offering cookies with BOTH gluten and sugar. “Here you go. Have a delicious cookie. Just remember, a moment on the lips, a lifetime on your hips you lady terrorist who terrorized me by hiding my tampons on day 2 of my period! All I had was toilet paper. It was a mess!”

That is a world run by the lady ego. Is that reductive? YES! Of course but only because it’s impossible to imagine how ladies would run the world without male influence. Every element of society has been influenced by the male identity, and women have just learned to squeeze ourselves in, not revolutionize it.

But the male ego, the fragile male ego. Holy shit. They make bombs that look like their dicks that dick over an entire nation in a matter of seconds by coming too fast and all over their metaphoric face. It’s a lot. It’s a lot to take in.

Yet, I am an equal opportunity genital person. I don’t want to attack men all willy-nilly. It’s important that I display empathy and compassion. I would like to get to the root chakra of this conundrum of why the male ego is more fragile than a Faberge Egg?

Is it because of his highly sensitive exposed scrotum? Just flopping in the wind, bouncing around as he walks. Does the extremely delicate balls sack motivate a deep fear in men, because they have to spend so much mental energy protecting them? Is there an angst I can’t understand because my genitals are all tucked in a like a suitcase, durable, and prepared for a journey? Yet all it would take for me to destroy a man is access to his balls. I could take them, turn them around in my hands like those metal Chinese Baoding balls for a while, and then, when the moment was right, squeeze the shit out of one until POP! Is that the problem? Is the tenuous sate of a man’s unprotected testes why we have nuclear war?

Perhaps the boner is the main source of the male ego. I can imagine a boner is a very stressful thing. Again, a difficulty we women don’t have. I have never experienced performance anxiety about my boner. Of course a woman can be dry when she is not turned on, yet both parties can pretend that’s not happening with some spit, lube, coconut oil, of course the slime collected in packaged meat. There is an easy fix for the lack of lady boners. But when a man can’t get a boner, there is not much one can do about it except look at his flaccid penis and say, “it’s okay little guy. Better luck next time.”

Maybe I’m wrong. I’m open to being wrong. But then you tell me why! Why is the male ego so goddamn fragile that he will rape, pillage, and bomb the shit out of countries just to prove its existence? Aren’t there other ways to make money and feel powerful? Like say, create an app, or start a podcast. 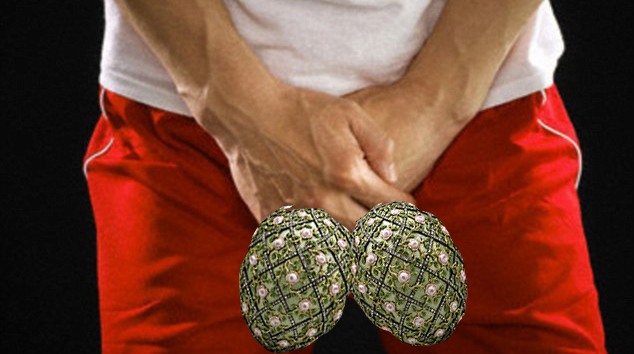