Sassy is The new Classy – Thanks Sasha and Malia! 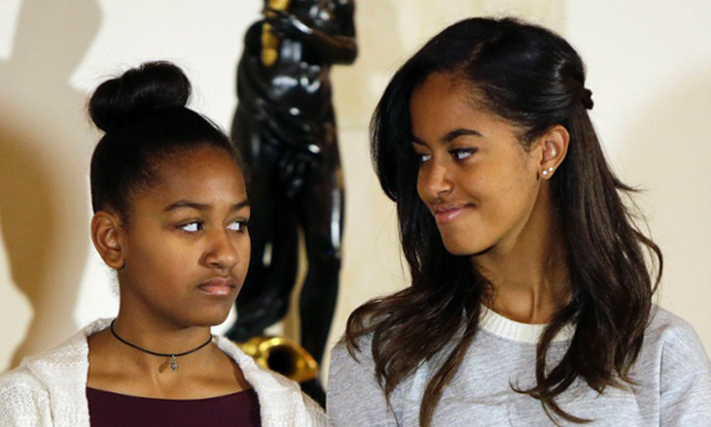 Although social media is cool because we get to look at pictures of our ex-lover’s new lover, it is also a platform for straight up antagonistic bullshit. Elizabeth Lauten went on a Facebook rant about how she didn’t like the faces Sasha and Malia Obama made during the press conference while their dad pardoned a turkey for Thanksgiving. Ironically she was the Communications Director for GOP Representative Stephen Fincher from Tennessee before resigning today. She also said the girls should get a little “class,” not dress like they are “at a bar” and “act like the white house matters to you.” Ummmmm Elizabeth you may want to reconsider your approach to communications; attacking children doesn’t exactly make me think you have a ton of class.

Of course it takes a village to raise a child and theoretically you want other adults to take an interest in your kid’s behavior. If my child was acting like a dick at your house, I’d appreciate you addressing her actions. Yet I hope you would be kind and empathetic in the process. I would be less pleased if you said to my kid, “shut up you little asshole.”

Elizabeth Lauten not only insulted the Obama girls, but used them as a vehicle to demean their dad.The crux of her point was less about eye-rolling and pouty looks, and more about how they are representatives of the people who raised them.

“Then again, your mother and father don’t respect their positions very much, or the nation for that matter,” Elizabeth added. “So I’m guessing you’re coming up a little short in the ‘good role model’ department.”

Politically, I am not an Obama supporter. Anyone who becomes president of this country is a highly compromised individual with too many people to appease (and by “people” I mean the ruling elite who control all banking/industry/corporations– and who may or may not be the decedents of lizards). My interest in this saga is less about “how dare you Republican Elizabeth attack the blameless Democrat president,” because that is par for the course. Yet what I do have a problem with is her blatant attempt to devalue Obama by insulting his children.

We know Elizabeth is familiar with the teenage experience. After all, she herself was arrested for shoplifting during those prime years. Surely she remembers the complexity of those tempestuous years. Rather she decided that insulting Malia and Sasha Obama was the perfect chance to attack the President. Generally, our society operations from the understanding that children are the psychological property of their parents. To make the leap that some sassy stares means Obama is a horrible father, and therefor president, was a jump that made sense to Elizabeth.

The cultural implication of viewing children as extensions of their parents is that a kid’s successes/failures are not theirs alone, but also that of their mom and dad. We can’t truly know the precise nature vs nurture ratios, so we tend to cherry pick the traits we want to believe are our flawless parenting techniques or supreme genes. How much of my kid is her personality and how much of her is my amazing mom style? This is not an equation we can quantify.

It is pretty common for parents to take credit for all the parts of their children that they like. “My little Timmy is such a good dancer. He gets that from MY side of the family because I learned the fox trot.” Or “Little Susie is so clever. I think she gets it from me because I once figured out how to untangle my headphones in under 7 minutes.”

We love to attribute ourselves for the ways our kids are remarkable. Yet when our kids suck, that is usually because that is “just they way they are.” We rarely hear parents say “Oh well, Jimmy has major control issues and hits other kids because we have no boundaries in our house. I also often bribe him with sugar just so he will leave me alone for 20 minutes while I cry in the closet. Not to mention I hate my husband, and Jimmy looks just like him so I sometimes get irrationally angry just looking at his face.” It is much easier to just be like “Jimmy has had a strong will since he was a baby. It is just who he is.”

It we hold ourselves responsible for all the goodness in our children, we have to be equally responsible for the bad. Yet I don’t think that is giving them enough credit, nor the variety of other influences they are exposed to.

Maintaining this level of attachment to our kids as ambassadors for ourselves because puts excessive pressure on the relationship. How many adults continually trying to appease their parents rather than finding their own path? A lot. “I am going to be a lawyer just like you daddy… even though inside I just want to design costumes for figure skaters.” Our children aren’t our possessions; we are merely the stewards of their development.

As a parent, I want the best for my child but that can’t mean wanting her to be the best reflection of me. Maybe the best for her will be to live in a cave subsisting on plankton while contemplating cloud formations. I won’t know unless I let go of the idea that my kid is an echo of me. Any motivation for interfering with her behavior can’t be so she makes me look good, but because that is the best way for her to learn how to be a good person with a fulfilling life.

Sasha and Malia are the daughters of the president. They are also their own people trying to understand their place in the world.They cannot be held accountable as white house diplomats for our public viewing pleasure, nor should they bear the burden of their dad’s reputation. We have to stop treating kids as commodities of their parents, and more like evolving creatures they are, with a variety of inspirations to contend with. As parents, the less ownership we feel over our children, the more honestly we’ll experience since our egos and agendas won’t blind us.

Besides… considering the Sasha and Malia are 13 and 16, I am pretty sure they are mature as shit. If my dad was president and I was a teenager in the White House, that press conference would have been a whole different scene.

First of all, I would have been stoned out of my mind. Not only would my eyes be as blood shot as Vince Vaughn on a Sunday morning, I would also be munching brownies with my mouth open while staring off into nothing and giggling randomly. When my dad tried to engage me to participate in this absurd American tradition, I would have gone on a 15-minute diatribe about the mass murder of millions of turkeys and described in detail the process of their slaughtering. Then the ecstasy I took would kick in, and I’d probably dry hump the turkey while mumbling about how politics is a cover up to maintain financially tyranny over the world via private banking systems and endless wars. I would then scream, “I hate you Dad! No one understands me,” collapse in a pile of my own sweaty vomit, and cry because I was really hormonal at 16. 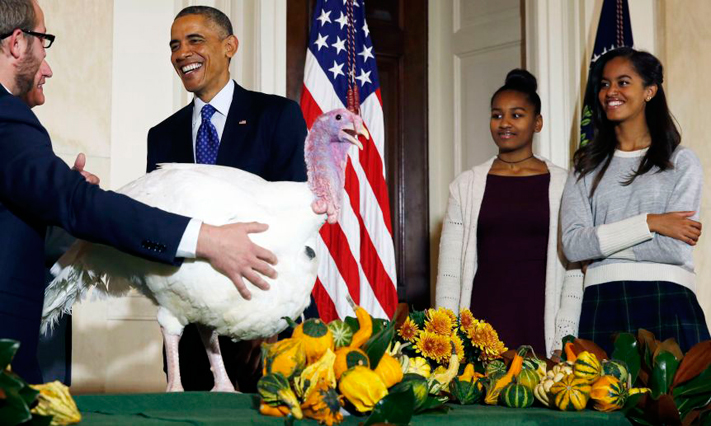