I Go Poops in the Potty 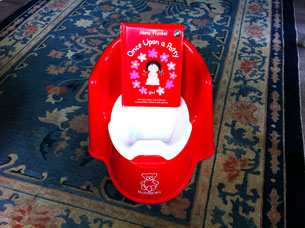 A big part of being a parent is dealing with poop.  At first, you have the cleaning up of poop. The making sure poop doesn’t get in your kid’s twatt, or cake to their balls.  The times poops leaks out of their diaper, down their back, and into their hair.  The poops that some how got under your fingernail, and the poops you have to scrape off their butt cheeks because you didn’t’ change them fast enough at it caked to their skin.  All while never gagging, retching, or saying “holy shit that is a massive disgusting shit” because that will give them a complex. Your life becomes a poop filled adventure.

So you deal, with as much grace as one can.   You don’t throw your child’s burrito and corn sprinkled poo diaper out in your friend’s garbage. You take it home with you, like a doggie bag ready to snack on later.  You spend years of your life noticing consistency, remembering diapers, wipes and cream so your little loved one doesn’t get chafed, raw, itchy, genitals.  You are considerate, you are patient, you are stoic in the face of olfactory horror because you know it isn’t going to last forever.  At some point, your kid is going to poops in the potty and it will no longer be your problem.  Just something they do in private that you hopefully will never have to witness again.  Their diarrhea will be their own battle.

But to obtain freedom from your child’s bowels, one must deal with teaching them not to shit their pants.  You would think this was easier said then done.  If someone pulled me aside and told me “Hey Toni, you actually don’t have to shit in your pants anymore.  You can poops in the potty and never again smear your feces across your buttocks when you sit,” I would be game.  I think I would be pretty into not waddling around with a poops weighing down my pants.

So far in this process of “potty training” The Munch and I are not seeing eye to eye.  It isn’t that she doesn’t know she has poops in her pants, because she sure does…  But when I try and have her poops in the potty she just says “No I don’t want to.”  If I ask her why she answers “I don’t want to.”  Hard to argue with that.

We read books about pooping in the potty, she tells me how “Mamma poops in the potty” and she will climb into her potty and stand.   She will then talk about how much she likes standing in her potty, and maybe even try to put the potty on her head.  But she will not sit on it.  I guess maybe having poops in your pants isn’t that bad… after all it is warm and smooshy. 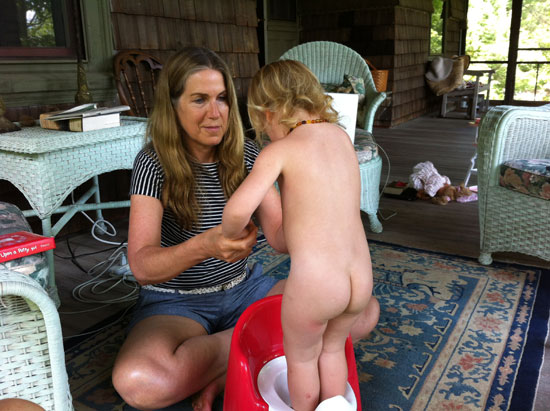