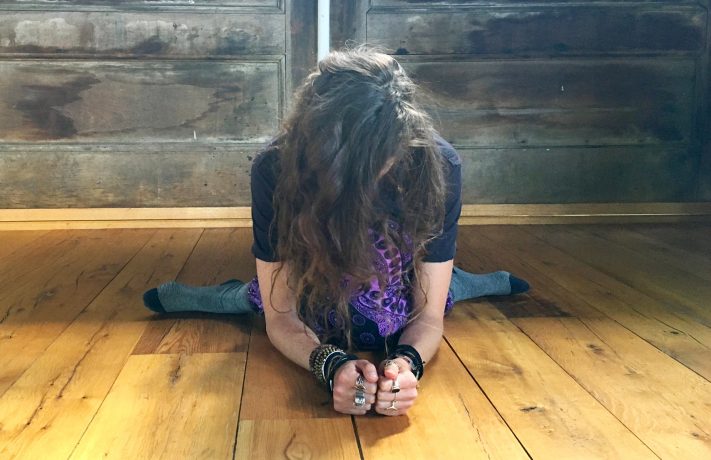 Do you guys have a good relationship to your body? Have you always? Mine has waxed and waned, much like the moon, or a vagina.

When I was a kid I was SUPER skinny. Picture a skeleton, but with skin, and on roller skates singing along to Bell Biv Devoe. I was very tall, thus stretched out, and basically malnourished. I love you mom and dad – you’re great in every way except in how you fed me my poison. My parents were busy, and didn’t really notice that I pounded pounds of candy for dinner. The “food” I ate was often Chef Boyardee, aka microwavable dog food for children. My mom is saying to herself right now as she reading this, “But Toni, that’s what you wanted for school lunch,” and my retort to that is – 7 year olds are idiots that smell their fingers after they stick them up their butts. DON’T LET THEM DECIDE WHAT IS GOOD FOR THEM!

I was self-conscious about how thin I was because people would often remark on it. But then again, I was also high as fuck on high fructose corn syrup so I was also trying to chew off my own ear. I didn’t see being skinny as desirable, and would have preferred a more robust figure with greater padding so my butt didn’t get so soar on a sea saw.

Then in the 5th grade I went to camp for the first and only time in my life. For whatever reason I wanted the life experience, probably because my mom thought it was funny to wear “Magnum Condom” T-shirts to pick me up from school. At camp I didn’t have any friends because everyone had been going their whole lives, and I was just the new girl that never got any mail. Finally one girl befriended me, but she was also anorexic – but who was I to be choosy! The only thing this girl would eat was shredded carrots and Italian dressing. Yet because she was my friend, I did it too in solidarity. When my parents came to pick me up they couldn’t see me at first because I was standing sideways. I obviously didn’t need to lose that weight, but I did learn that starving yourself is a pretty effective method.

Then when I got to high school I started, you know, banging dudes. My mom put me on birth control so I wouldn’t become a teen mom. LITTLE DID SHE KNOW SHE RUINED MY CAREER AND I COULD HAVE HAD MY OWN TV SHOW ON MTV!

Once I got on the pill I started packing on some pounds. At first it was cool. For the first time I had big boobs, and an ass. I also cried everyday for an hour because of the excessive hormones but did I mention my big tits!!!?? WORTH IT!

Because I had grown up so excessively skinny, I also was in the habit of eating like a football player. My appetitive was massive. Yet once I was a teenager on the pill and eating for two despite my non-pregnancy, it didn’t exactly translate. But at first I didn’t really notice. My weight was first brought to my attention when I was hostessing at a restaurant at age 16, and every day after I work I would get a brownie sundae because of course I did. Then one fateful Friday one of the older waitresses was watching me eat with a look of apprehension.

Then she blew up her cheeks to indicated “fat.”

That was the first time in 16 years that I thought food could make me fat!

I didn’t see myself as chubby, but I started to think I had to “watch what I ate.” Then I was approached by dude to “model” because I was the right height and must have had that dead look in my eye that said “I hate myself enough to do anything to please you.” but he told me that I had to lose anywhere between “15-120” pounds to make it to my ideal weight… my birth weight.

I then developed another complex. Before I felt too skinny, but now I wasn’t feeling skinny enough!

To deal I pulled from the memories of camp deprivation, and the effectiveness of eating nothing. For the entire summer after graduating high school I ate nothing but a can of tuna fish a day. My friend had told me the “Atkins Diet” was the best way to lose weight, and so I figured mercury poisoning was a sure fire path.

For the next 11 years I had a weird relationship to food. Was it an easting disorder? I was probably on the spectrum, much like I am with my high functioning autism. Who are all these confident people out there who can look everyone in the eye!? I wouldn’t say I was constantly suffering over my relationship with food, but it was also somewhat disordered. I was never as extreme of my 3 months of losing 1/3 my body mass, but it was off. I would think a lot about food. What did I eat that day? Was it too much? Does that mean I should eat nothing tomorrow to balance it out? It was in a cycle of binging and starving… plus I smoked a LOT of bong hits so I wasn’t exactly making the best choices at 2 am.

It was stressful!! Being anxious about food sucked because I LOVE eating. Plus, I think the tension I felt made food hard to metabolize. I never enjoyed eating without feeling some sort of guilt around it – or obsessively questioning myself. The psychology around eating was not helpful for my body in any way. Even though I was eating pretty healthy, I still felt like I was eating too much. I had this thing with my stomach, and always wanting it to be flat. So when I ate food, and my stomach would poof out trying to digest the nutrients – that would drive me crazy town. HOW DARE YOU STOMACH NEED SPACE TO PROCESS ALL THAT I HAVE PUT INSIDE OF YOU!

Then I got pregnant. I could no longer have a “flat stomach” because there was a baby in there poking out. Just like that, I stopped caring about what I ate. Of course I INSISTED that everything was not only organic, but also harvested by fair trade gnomes, but other than that I ate whatever I wanted. When I was hungry I ate, and never thought about it again. I stopped thinking about food entirely except how yummy it was. I felt like what I assumed it felt like to be a guy. “Me stomach want food. Me stomach happy now that food in it.” I gained about 50 pounds when preggers and couldn’t have given less of a shit because HOLY FUCK MY TITS WERE MASSIVE!

Then I had the baby and was breastfeeding. Now I don’t know if you’ve ever had a parasite suckle from your teat 70 times a day, but boy does that give you an appetite! So I ate when I was hungry, which was ALL DAY LONG. I would have two hamburgers for dinner no problem. I ate constantly and joyously.

7-years after the birth of The Munch I still have a pretty ravenous appetitive, even though I only breastfeed when asked politely by random men on the Internet for money – it’s my side hustle. I eat what I feel like eating and never feel guilt about it because I need a lot of food to live my life! I move my body a lot, dancing, walking, doing yoga, and beating my head against the wall wishing I had Lena Dunham’s career – that burns more calories than you’d think. Yet since my pregnancy, I never went back to my previous relationship with food. My body creating and hosting a life gave me such a more profound relationship to it, and I was freed from the stress around eating. Because my psychology around eating has changed so drastically, I think my body processes food better. I don’t watch what I eat. I eat what I want when I want it. That involves, gluten, sugar, meat, cheese, pizza, meatball sammiches… I eat like a dude in high school but add some bok choy. Yet I had been feeling that my body was totally fine! I had no problems with it!!! NONE!

Now another thing worth mentioning is part of my total body acceptance has to do with the fact that I NEVER look in mirrors. We have a mirror at my dance studio of course, but I’m not looking at my body to pick it apart aesthetically. I’m looking at the whole package and how it moves as an instrument of art. It doesn’t occur to me to pinch my stomach fat, but rather I’m noticing if my arabesque has the right line, or if my butt could move faster while pumping it to Drake. At home I don’t have mirrors except in the bathroom and there’ll all kind of dirty and covered with pieces of food from flossing to close.

But since my fucking TICK BITE, and my fear of having TICK STD’s I’ve had to search my body nightly to see if any tiny insect is sexually violating me with its tiny tick dick. I have to look in a mirror to make sure I’m not missing anything and… You guys it’s fucking me up!!!!

I’m like wait what’s that mole on my back? Has that always been there? What’s up with my upper thighs? Is my butt okay… wait, can it move faster to Drake or not? But also is it okay looking?? Oh yes it can move faster, nice.

I’m getting body dysmorphia trying to make sure I don’t have ticks on me! Looking in a mirror too much will drive you nuts!

But I have a solution! I will use a flashlight and search for ticks in the dark instead… because then it’s like a fun nighttime party game that justifies getting wasted every night. THAT’S HEALTHY RIGHT!

Here is the tick that bit me… under a microscope. The Lab that tested him for tick STD’s sent it to me. Sweet right! 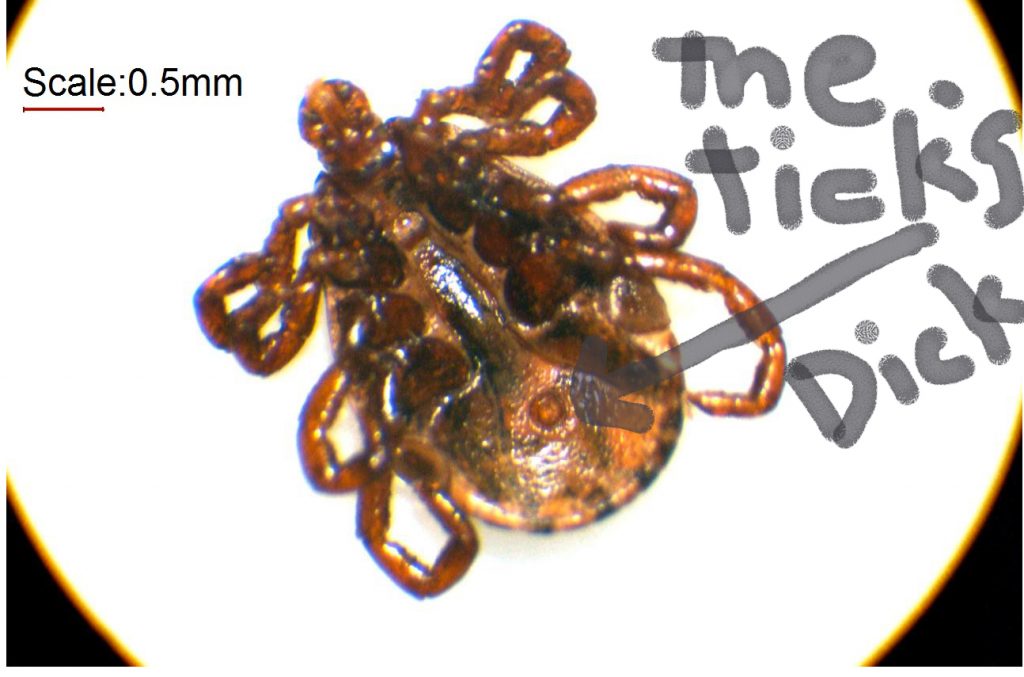 Previous post:
My Life Pretty Much Sucks, How About You? Next Post:
Oh, That’s Just My Open Wound