Got Your Nose! (But Seriously, Give it Back)

You know those fun little games adults used to play on you when you were a kid?  Like grabbing a quarter from behind your ear, or pretending to get your nose and then using their thumb as a decoy.  Remember how sweet and innocent that was?

So I decided I would play those game with The Munch.  I gently tugged on her nose, ever so slightly, and said the expected phrase “I got your nose” showing her the supposed nose between my fingers.  She of course thought this was delightful, and quite hilarious.  So I thought to myself.  “I have done a good thing.  I have passed down this generational gift, and now she too can experience the nostalgia.”

Yeah, that was until she tried to get my nose – and almost ripped the thing off my face!!  Now I live my life in total terror.  Out of nowhere she can attack me with her ninja skills, try to tear my nose bone out of my skull, and then sweetly say “I got your nose Mamma.”  I am not sure if she is a sadist, or genuinely doesn’t understand that you are not supposed to literally detach my nose from my body.

I should have quite while I was ahead, but instead I had to push it.  I tried the trick of mysteriously finding the quarter behind her ear.  Again, this brought her much joy, until I tried to put the quarter back into my pocket.

Okay fine keep it – you capitalist.

Then later on that day she started taking her filthy little nails and scraping the back of my ear.  And mind you, these things are sharp!

“I am looking for the money?”

“No munch there is no money behind Mamma’s ears.  It was just a magic trick.  Its not real.”

“It is real!! There is money behind your ears!! AHHHHHHHHHHHHH!!! I WANT IT!!”

So now not only do I have a bloody nose, but also bleeding ears that are sort of falling off my head.  Barely hanging on by a string of ear flesh.  Think I am going to stick to games like “go fish” from now on.

(Check out Munch in her old-timey coat and pocket book!) 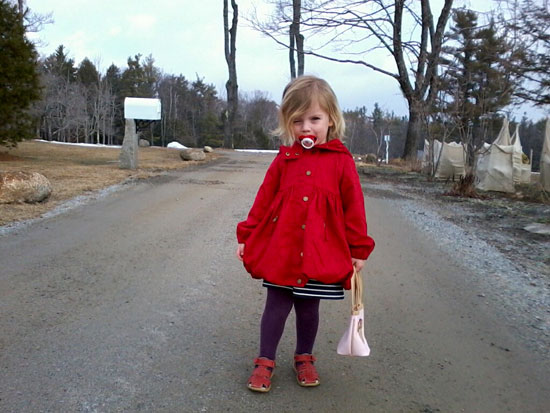