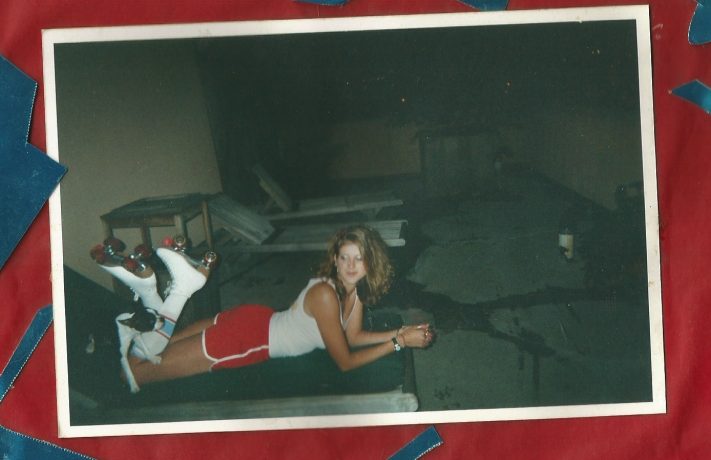 The above picture is of my dog Mona when she was a puppy. I was 21, just lounging around in roller-skates – obviously killing it at life. Now my dog is 16 years old, blind, and deaf. I don’t know if you’ve ever had a dog that was not only blind, but also deaf, but let me tell you…. IT IS FUCKING HARD AS HELL WHEN YOUR DOG CAN’T SEE OR HEAR!

You’d think that because of her handicaps, Mona would be more cautious. NOPE. Despite Mona’s age and disabilities, her body is quite spry. She spends her days taking many risks. For example, Mona once decided to push her way through the cat door, falling 9 feet onto a furniture tower in the basement. I searched for her for 2 hours in the woods before finally thinking to check down there. It’s insanely stressful when Mona goes missing because you can’t call for her, and YOU CAN’T FUCKING CALL FOR HER! Mona relentlessly escapes the pen that we made for her outside, and has been found miles from my house. How a blind deaf dog not only maneuvers her way through a screened in enclosure, but also traveled so far is beyond me – but the policeman was SUPER judgey when he returned her.

Mona also now shits and pisses in the house almost daily. Okay, she’s old so this happens, but because Mona can’t see she, steps in her urine and shit balls only to then walk around covering the kitchen floor in paw prints of her piss soaked feces debris. It’s a delight!

My dog’s aging of course makes me think of my own. I guess I’m officially considered “middle-aged” now? I’m 37 ½ years old. The half is important because I think that’s what keeps me in my “mid” 30’s as opposed to my “late”30’s, which is just 6 months away. Next year will be my 20 year high school reunion which is meant as marker to see how far I’ve come in the past two decades, yet I currently still spend a LOT of time with teenage girls talking about boys and dicks sooooo, I don’t know?

When I was a kid I used to imagine what being an adult would feel like. For one, I was going to have HUGE tits, and for two, I was most likely going to feel like an adult. None of those visions really panned out, despite many wishes on a star for a full D.

As a 37 year old I posture participating in adult activities, but it never feels authentic. I do these grownup things like go to lawyers, or send in forms for my taxes – but all this signing pieces of paper I don’t understand just feels like I’m playing pretend. It’s like I’m still that same kid wanting to be someone I’m not while stumbling around wearing my mom’s high heel shoes – and her makeup, and bras, and underwear while balancing her diaphragm on my nose like seal… everyone did that right?

I think a part of me is in denial. I didn’t even notice I had wrinkles until my friend pointed it out. I guess it wasn’t clear to me because I don’t make a lot of faces in the mirror – just the one where I brush my teeth, and of course the other one where I’m yelling, “you’re never going to be good enough!” My point is, I didn’t realize I had wrinkles until a picture was posted on FB of me with my eyebrows raised and apparently my forehead was contoured with lines! My friend messaged me (actually it was TWO SEPARATE FRIENDS) saying, “Toni you have to take better care of your skin!” Jesus Christ you mean washing it with hand soap twice a week isn’t enough??!! WHAT DOES THE WORLD WANT FROM ME?

So yeah, I’m getting older and I resist it. Not because I don’t want to be old. Being old is a gift! I think being an old lady will be super fun. I’m going to do a lot of acid, and then talk about my puss to random people at the farmers market just to freak them out. It would be a delight if I get the chance to be a raunchy, shocking, old lady that everyone has to tolerate because, “you can’t teach an old bitch new tricks.” Sounds like a dream. The old part is going to be rad. It’s this in-between part I’m not so sure I’m into because it’s so fraught with expectations.

So far I don’t feel like I’m a successful adult. I don’t own a house. I don’t have a high paying career. I’m not invited to dinner parties, and when I go to a parent teacher conference for my kid I find myself in a state of shock that I’m sitting in that tiny chair to hear about her, not to learn long division myself. Being a mother is the most mature thing about me according to society’s standards, but keep in mind my 6-year old and I both equally enjoy the new Katy Perry song “Swish Swish,” and I can’t help but notice that we dress the same.

So yeah, my daily uniform of leggings and hoodies does not exactly make me appear like I’ve got “my shit together” as a grown up. In many ways, I am still striving to be one. I have this endless yearning towards finding success in my artistic pursuits, and the naïve assumption that achieving that will make me feel whole, even though I know it won’t. Yet I think I hold onto my youth as a means of excusing the reality that I cannot stop making art, and that is the only life I want. It’s a childish commitment of wanting a life full of creative expression, and I’m not sure I will ever feel like I mature out of that.

Maybe I also am stunted in a certain way because of the death of my best friend? She died when I was 20, and I part of me died too that day. Perhaps holding on to youth is my way of holding onto her. We stopped growing up together the day she died, and it’s almost like I don’t want to outgrow our friendship by leaving behind that part of me. But I’m also sure if she were alive today, we’d still be smoking pot together while skinny-dipping in lakes – doing handstands in waist deep water in the middle of the afternoon. So maybe it’s just the tribe of people I surround myself with?

The only place where I can say with true confidence that I’ve grown is emotionally. In that way, I am mature as fuck. I self-reflect, I don’t blame others for my problems, I look out for others, I do favors, I know how to apologize, I am forgiving, I’m not afraid of failure, I take risks, I don’t hold grudges, and I try to find solutions to my challenges rather than wallow in self-pity. But I can’t put shit on a resume. There is no bragging on Facebook about my most recent accomplishment of “being really gracious when someone was taking out their bad day on me, and then helping them to dig deep into why they were acting out.” So yeah, maybe when I go on Facebook and see a Congressman Kennedy verbally eviscerate Donald Trump’s budget I think to myself, – “huh I went to high school with that kid and he’s probably gonna be president” and then fall into a spiral of self doubt where I debate pulling out all my eyelashes just to feel something different. But then I have to remind myself, “but Toni, you did open that door for that dude carrying all those boxes at the Organic Coop – so you’re doing your part.”

Here’s Mona… having escaped and frothing at the mouth with one cataract reflecting in the sunlight. 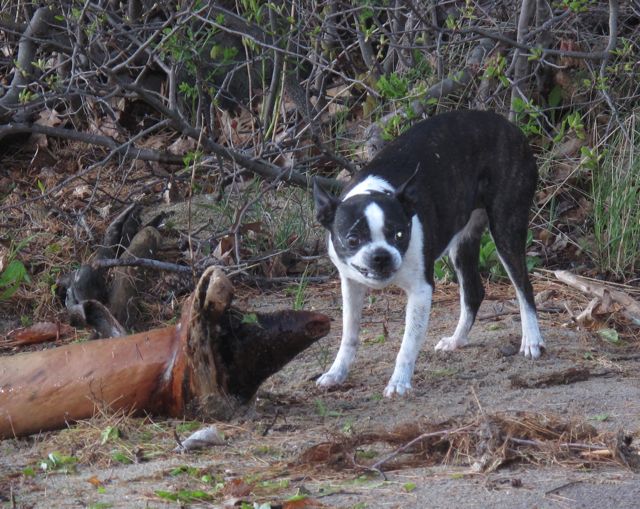 Previous post:
I Can’t Play With You!! Next Post:
My Life Pretty Much Sucks, How About You?