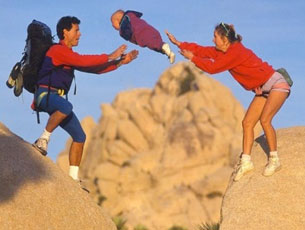 I would like to think of myself as a person who pushes boundaries. I like a physical challenge. I wouldn’t say I am a freebase jumping off a building type of girl… but I am definitely someone who would jump go cliff jumping, or swim across a lake, or climb a mountain in the dead of winter. I like to do things that others might think is intense, but I don’t do things that people think is outright crazy.

Despite my propensity to test limits, since having a baby, the line has become a lot lower. The risk/reward factor has drastically decreased, because no adrenalin rush is worthy of putting The Munch in danger.

So my when my friend sent me that picture of a mom tossing her baby over a ravine my first reaction was “what the fuck is wrong with her!?” All I could see was potential horror, making my stomach turn inside out like socks out of the dryer.

Part of me thinks it is beautiful that these parents are hiking with their baby and exposing him/her to their passion of nature. But couldn’t you take the bunny trail? You don’t have to totally compromise yourself, but like it or not a baby does change your life. Can’t you tone it down a bit?

It was similar to how I felt when I saw the “baby swinging yoga video.” When I first came across the title in an email I was all “awwwwww, this will probably be cute… baby swinging yoga.” But when I clicked on the video and saw a burly woman fluctuating a baby around like a nun chuck, all I could think was “what the fuck is that bitch thinking?” Do whatever potential benefits outweigh the risk of tossing your baby accidentally? I mean it is a human, not a purse you are swinging!
(Check out the video… if you can’t make it through, go to the end and see how the baby reacts)
Swinging Baby Yoga

The video left such a strange taste in my mouth I had to eat a brownie. Okay fine… I just wanted a brownie. Part of me felt like that chick was insane, but part of me thought the baby did not seem to mind. There was a rhythm to the whole experience that I think provoked some sort of trance. Even though I thought Brunhilda looked like she could have flung the kid off into oblivion, or at least dislocate a shoulder, they baby seemed malleable and pretty much going with the flow. Not that it had a choice.

And maybe that is my problem. Not that these people are seriously extreme with their childrearing techniques, but the baby’s have no say in any of it. But my baby doesn’t have a choice either when I put her in a car to go grocery shopping… and maybe that just as life threatening?

I then got an article interviewing the “baby swinger” who pretty much had a totally different cultural view on what she did. She said that she has been swinging babies for decades, and swung the shit out of her two daughters who know can communicate with dolphins and translate Sanskrit in their sleep.

I guess at the end of the day it is hard to judge another person’s parenting. Maybe it is all about intention? If you fully believe what you are doing is the best thing for you baby, then maybe it is? But if your actions are veiled with your own selfish agenda, then maybe it is time to prioritize your baby over yourself? At least until they are old enough to tell you if they think you are totally nuts. 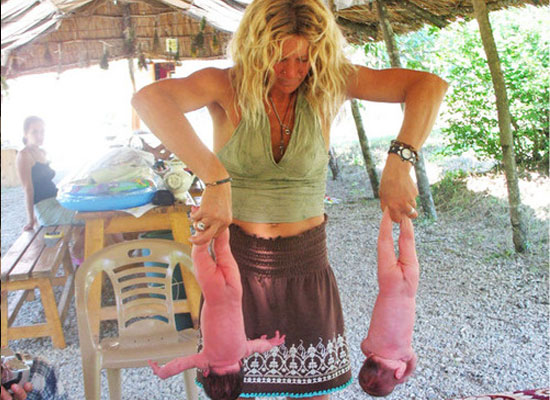