Everyone Has Got a Type 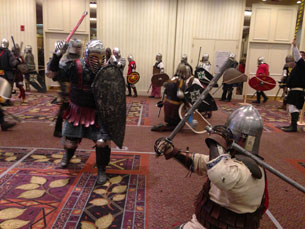 This weekend I went to a renaissance fair.  I can’t really tell you why.  I live in the country, and will go almost anywhere someone invites me just to break the mundane routine of life.  And nothing says The Renaissance like the Radisson Hotel in Manchester New Hampshire.

My friend Cyndal is the one who is into this world, and Munch and I were tagging along for the experience of it.

“So Toni, I will come by in the morning to bring you some clothes that are period appropriate, but you are going to have to find something for The Munch.”

I don’t know if you have ever been to an event like this, but let me tell you, these people are not fucking around.  Not only was everyone dressed like wenches, princesses, maidens, peasants, gnomes and knights, but everyone was dressed WENCHES, PRINCESSES, MAIDENS, PEASANTS, GNOMES AND NIGHTS!  According to Cyndal they are Scadians, which is a term for the members of SCA, or the Society of Creative Anachronisms.  There is a whole industry around creating costumes, armor, leather satchels, Robin Hood hats, helmets, corsets, swords, and was all sold at the market where you could pay by credit card swiping an Ipad.  Just like they did 1000 years ago.

Cyndal suggested we go watch the battle, where people were either fencing or beating each with sticks, swords, and axes.  The fencing was more of a laid back scene, but the reenactment battles were really brutal.  I mean these guys were really wacking each other.  I guess they had shields and armor on, but the sounds of the weapons clacking against the top of someone’s helmet were horrendous.

Of course, The Munch was obsessed with the battle scene.  She was mesmerized watching these guys, and I started to panic thinking she was seduced by all the violence and fighting.  She has been going through a hitting phase, so we have been doing all this talking about how hitting is not the solution to frustration, and then here were these men pummeling each other.  I didn’t know if I should take her away because of the bad influence of this behavior, or totally start stressing out about what kind of impact it would have on her relationship to physical aggression? But she was so happy, and I had a really good idea for a tweet to twitter.

I finally pried her away after about an hour to go watch some belly dancing.

“Mamma I want to go back to that other room.”

Oh, maybe The Munch wasn’t into the viciousness at all, and just has penchant for nerdy guys. 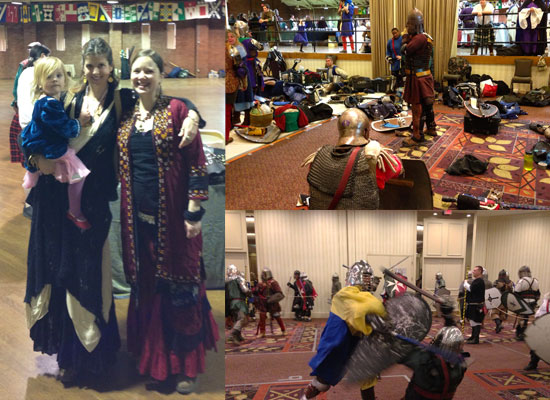