Corporations Have Brainwashed My Child! 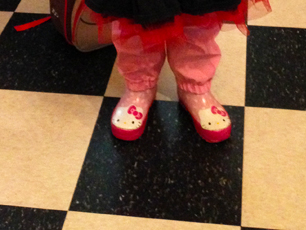 How committed are you to your politics?  Do you feel like your actions betray your beliefs?  To what extent are you able to actualize your morals when it comes to the value system you espouse?  Am I getting too nosey?  Sorry, I have allergies.

Before having a kid, I felt like I was pretty committed to my world philosophy.  The basic assumption I operated by was that corporations rule the planet, and our political system is simply a distraction for the bankers / business executives to pillage all earthly resources for their profit – facilitated by politicians allowing themselves to be bought by the capitalism system that drives humanity.  Considering this, I tried to avoid economically participating in this structure.  I refused to buy anything from a major corporation (or subsidiary), lived on a bus that ran on veggie oil to circumvent contributing to the oil economy, and I smoked a lot of pot.

When I had The Munch, I had a lot of grand ideas of how I would raise her.  My aim was to be The Mother Gaia incarnate, and adorn her with nothing but organic fibers and pukka shells.  When people would gaze upon her they would say, “wow, your child’s flaxseed dress is a beacon of hope – she is obviously fair trade.”  Then I would smile smugly because I would know that I wasn’t only part of the solution, I WAS the solution.

Yet now that The Munch talks and feels the need to share her opinions, everything has gone to shit.  I have become a total hypocrite… and it all started with Hello Kitty.  I wish I had a legitimate excuse, but the truth is, I guess I just gave up.

This is how it all started.  There are a lot of things I insist on as a parent.  For one, I have never given The Munch GMO’s.  We live on a farm, she only eats organic, and she HAS to consume at least 2 leafs of kale before she has cookies.  When it comes to food / diet, things have gone as planned. It is not always easy, but we have an understanding.  Yet what hasn’t gone as I anticipated TV / Youtube.

My initial intention was that I wouldn’t let my child watch anything until she was at least east 6.  Yet when the Munch turned two, I was like “Huh…. You are really annoying sometimes.”  So she started watching stuff when she was sick, or on long car rides.  The more she was exposed to, the more the marketing starting to seep into her psyche just as Bernays (the father of PR / propaganda) wanted.  Her impressionable mind was being taken over by Disney Princesses, Carebears, and Hello fucking Kitty.

In conjunction with her interests in corporate media, The Munch also has an adamant and controlling nature about her clothes.  Now of course I could force the taupe colored natural fiber cloak on her, but she is old enough to take things off she doesn’t want to wear, as well as exasperating enough to drive me batshit insane.  I cannot tell you how many fights we got into about what outfit she would wear.

The solution I came up with to avoid this daily drama… Get her Hello stupid Kitty clothes that are made in a sweatshop with pesticide ridden cotton.  I am so ashamed.

I know I could say to myself, “Hey Toni, you are doing the best you can. You drive a hybrid and care about recycling.”  But I know the truth.  I am a total fraud because it was easy.  Buying everything Hello Kitty was the simplest way to get my kid to wear a raincoat, or change her socks.  I suck.

So here is my plea to the world.  Hey organic companies – can you stop making all your clothes fucking ecru?  Would it kill you to use pink, or stick a god damn cute animal on your T-shirts?  While you are at it, can you make a cartoon as well? One where the voices are SUPER irritating to further force your brand into her consciousness.  THANKS!

(Notice the Disney Princess Bandaids stuck on the door) 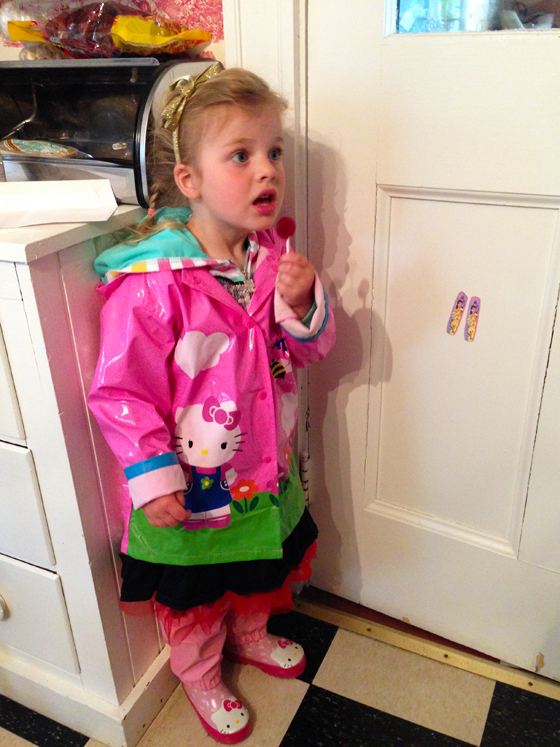