Can You Define Spirituality? 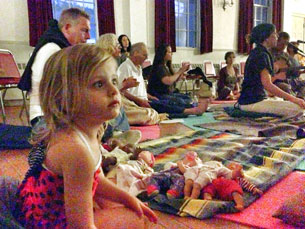 What is spirituality?  No seriously.  What is it?  People often say they are not religious but they are spiritual.  Yet that feels really vague to me with such a broad spectrum of possibilities.  Even my own understanding seems convoluted to myself. Am I still considered spiritual if I worship the dark lord Ungoolu and believe my child is an immaculate conception from the venom of his black seed? But don’t worry it didn’t hurt.  It was only a little prick.

When I was growing up I went to Catholic Church every Sunday until I was 15 years old.  My father’s mother was very religious, and it was important to her that my brother and I attended mass, so my dad made sure he honored her wishes.  But neither of my parents every told me what to believe.  They just brought me along and exposed me to it.

My dad was also a professor of ancient Greece, so I was very familiar with their Gods and the stories of Zeus, Hera, Aphrodite and the rest.  So herein laid my conflict as a 6-year old trying to wrap my head around God and religion.  I couldn’t understand why the religion of the Ancient Greeks was now so commonly considered “myth” where the modern religions were said to be “truth.”  What made one a fable and the other one fact?  Why were the gods of the past relegated to fairytale?

I didn’t like the idea that one religion was right another was wrong.

My other issue was around the concept of eternity.  My grandmother would tell me that when I died I would go either to heaven or hell forever.  I don’t know about you, but that concept freaked me the fuck out.  Eternity.  Forever.  Still gives me the heebie-jeebies.  I didn’t want to be in either place forever.  Even being in heaven for eternity was a terrifying concept.  So I asked my dad if he ever felt this way.

Child Toni: “Dad did the concept of forever scare you when you were a kid?”

Child Toni: “I don’t want to be dead forever.  I really don’t want it happening for that long.  Why can’t it just be over? What does the after life have to be so long?”

My dad: “Well, the idea of eternity in the western mind is very linear.  Like a line that just extends forever in one direction.  But the Greeks thought of eternity as cyclical.  So they had this concept called Telos, which means coming full circle.  That always makes me feel better.  To think of time as a circle not a line.”

Child Toni: “Okay.  Can I have fruity pebbles for breakfast?”

My dad: “Maybe another time.”

Even though I had these fundamental questions that made me feel unsettled, I would go to church every Sunday, and I would think.  I would contemplate the concepts of life and death.  I wondered about mortality constantly, but never felt like I was getting any closer to comprehending it.  And then when I actually lost someone I truly loved and cared about I finally understood.

When I was 20 my best friend died, and it broke me.  She was an angel of a person, and the tragedy crushed my soul.  But I realized that if I still let myself love her, that we would still be connected.  There was an energetic tie that kept us together even if she was no longer living on the planet.   I allowed myself to love her just as much as I ever did and even though I missed her more than anything, I still felt close to her.  I had to let go of the expectation I would ever see her again in a way that my human mind understood, but I would forever hold on to how much she meant to me.

And then spirituality started to make sense… even if in a very esoteric way.  Thinking in terms of love, energy, vibration, and connection.  It was around the time that my friend died that I started getting interested in Yoga. And through my physical practice came the introduction to the philosophical and spiritual elements.  Although I have never actively studied eastern religion, over the years I have had many experiences with meditation and chanting.  And it is through those practices that have helped me find a small semblance of inner peace.

It is when I am meditating or chanting that I can turn off that voice in my head that keeps chirping.  The connection to “Godliness” or “spirituality” I think can only truly be felt when the chatter of the ego is quieted.  It’s hard to have a spiritual moment while your ego is saying in your mind’s ear “I think yellow suede boots would make my butt look tighter.”

So I meditate and chant to help quiet my inner mind.  But I realize that I don’t really even know what I am saying half the time.  I bring The Munch to Kirtan where we chant in Sanskrit, and I could be singing how “I want a pigeon to peck my armpits” for all I know.  But I go because I believe there is healing in mediation and chanting.  That it connects you to the vibration of the universe.  Through those channels you can find moments of genuine noiselessness in your mind in heart.  It is in that silence where the truth is hidden.

The Munch loves going to Kirtan and all the other new-agey things I drag her to.  She sings along, plays with her babies, and emulates the weird dancing of hippies swaying their bodies around while failing their limbs.  But hopefully through these experiences she will contemplate the greater mysteries of existence and one day find her own beliefs.

(Notice that Munch is wearing her lady bug bathing suit…) 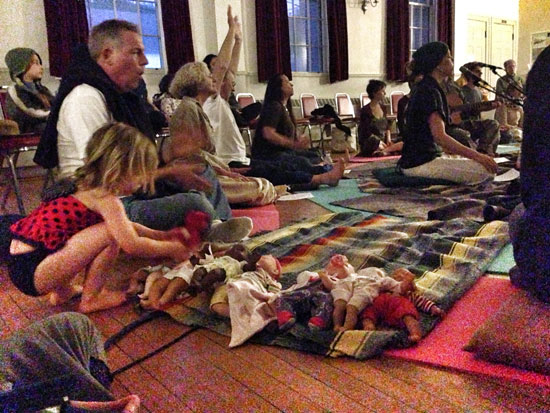