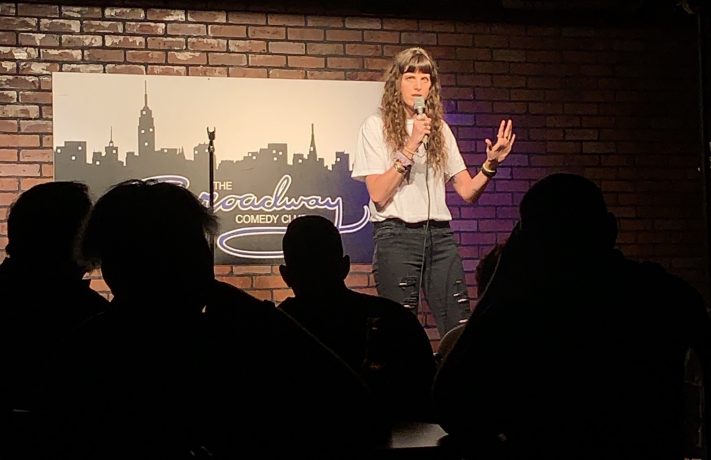 If you have boobs, how do you feel about them? What is your relationship to the fat sacks that protrude from the front of your chest? Are they a source of satisfaction? Do they lift your spirits, or cause humiliation? Do they weigh your soul down?

As a dance teacher, I can tell a lot about what you think about your boobs by looking at your posture. If your shoulders protrude inwards and your upper back slopes to hide them, that’s usually because you are emotionally conflicted by the presence of your breasts. Yet if you stand in such a manner where you stick them out, arching your lumbar spine thus compromising proper alignment of the sacrum, I can assume you feel confidence in your tits. There are some women (present company included) that have a hybrid of these two extremes. My shoulders slightly turn in to conceal them, and my lower back slightly arches to reveal them.

Our unconscious bias about our sex flaps have major physical and psychological repercussions. From a physiological perspective regarding proper posture, what we should aim for is neutrality. Neither pride nor shame – but acceptance. Our boobs don’t define us as women, they are merely accessories to our frame that should be viewed as impartially as elbows.

I realized a lot about what I actually feel about my body this weekend when I went to NYC to do a marathon of stand-up comedy shows. There is nothing that will put you in touch with your neurosis like standing in front of 70 people and trying to get them to not only laugh at your jokes, but also like you.

For my first few nights performing I wore a baggie t-shirt on stage. In my New Hampshire life, I wear a uniform of sweatpants and baggie t-shirts. Since I dance every day, there is no point in wearing anything but dance clothes, and my dance clothes look surprisingly like my pajamas. I have my night time sweats, my day time sweats, and they are indistinguishable. Even though I put on some eye liner for these comedy shows, my outfit felt very New Hampshire to me. Baggie shirt. Baggie harem pants. My body was hidden.

Yet my last night of performing I *gasp* put on a tank top. It wasn’t a super revealing tank top mind you – yet it was form fitting and revealed the shape of my figure. Now why did I wear said tank top? Because it was hot outside yes… but also because it was a hot looking tank top. It was my last night in the City and I thought maybe after my final comedy show I would go “out” with one of my NYC friends to have some party time.

When I lived in NYC for 10 years, NY Toni loved party time! NY Toni loved to go out dancing. The thing with NY Toni was that NY Toni was always kind of hungry, always seeking something, always looking for who was looking at her. New Hampshire Toni doesn’t do that stuff because there is no one for NH Toni to see seeing her but the trees in her back yard.

Since leaving NYC ten years ago I have been trying to find a balance between these two selves, but its painful to let go of who you were to become who you are. So, off I went to perform in my tank top that was also my going “out shirt.” Don’t worry though, I was still wearing the same baggie harem pants from the night before because I can’t bother to shower when in the city because rats. Plus I had recently discovered the glory of dry shampoo and was pouring that powder on my head like I was a founding father.

When I got to the comedy venue, I was feeling pretty damn good about myself. The other shows had gone really well and I was excited about the material. Everything was going my way so you can see where this is going… right?

I got on stage in my tank top, took one look at the audience, and immediately I started to unravel. Before I even opened my mouth, I knew it was going to go badly. My problem was that right in front of me was a disapproving older woman. The way she looked at me made me crumble. All my confidence melted like the Wicked Witch of the West and I was left with a pile of my own shame.

I felt my body and could sense her looking at me, looking through me. I became convinced that this disproving woman knew my motivation in wearing that tank top was superficial. She was aware that I wore that tank top to be old NY Toni even though she is a person in my past – a nostalgic version of myself I can no longer access sincerely. I tried to do my set, but I fumbled, flailed, and spun around in circles like a drunk spider weaving a web of humiliation.

The thing about stand-up comedy is that it’s very rare for an entire room to like me. But if I can get 2/3 of the room on my side, it can be a really good show. There were many other people besides this disapproving older woman that could have enjoyed me, but she was the trigger I pulled in my own mental suicide on stage. I was ashamed of my tank top, of my body, and of my intentions. It was threw her eyes that I saw myself, even though I was really seeing myself through my own eyes looking through her eyes into my own eyes.

Every other comic that show did well but me. They were also all men. I watched dude after dude make jokes that were just as crude as mine. The dudes were getting away with things I wasn’t because they were confident and I was so obviously unsure of myself. Just my luck, I had two more shows to do and there was no way I could do them in that fucking tank top. I snuck outside, went to a tourist shop, and bought a huge I Heart NY T-shirt. Of course, once I was properly covered, I killed the rest of my shows.

What the fuck happened? Was it me or was it the tank top?

It was how I FELT about the tank top.

In the external world, I think I did experience sexism from that older woman. She was genuinely judging me in a way that she wasn’t judging the men. I believe she did resent my body. But you know what? Men are sexist against me when I’m on stage all the time and it doesn’t affect me. If the sexist men don’t trigger me then why does the sexist woman? I was more impacted by the woman being sexist because I expect if from the men, but I don’t expect it from the women.

But do you see what just happened there? I allow men to get away with sexism but not women!!? Now I’ve turned myself into a misogynist for hating women who hate me and allowing men rights I don’t allow women!

In the internal world, I was impacted by the disapproving older woman because I have been socialized and conditioned to pander to the feelings of the older woman. Both my parents had contentious relationships to their mothers, so for me as a child, my relationship to my grandmothers was through the lens of my parent’s fear. Rather than feeling like I could be myself around my grandmothers, I felt I had to acquiesce to how they wanted me to be. I felt that love was conditional, and people only loved you if you pleased them.

The reason I was so impacted by the disapproving older woman in the audience was because she was the physical manifestation of one of my primal wounds! As such, I bled all over her, and myself.

Of course, I could have had the opposite reaction than to cover up like I was visiting a mosque. I could have been like, “fuck that – I like my tank top and this is who I am in my tank top so deal with it!” That is an approach that can really work for women too! Women shouldn’t have to conceal their bodies to feel like themselves. Finding confidence has nothing to do with what you are actually wearing, but how you feel about yourself in what you are wearing. The clothes are the casing. But your attitude is what makes the difference.

If what I seek for on stage is authenticity, its New Hampshire Toni that I have to dress like.

Here I am… contemplating my boobs