Being White Won’t Save You From The Police State

With the recent events in Ferguson a lot of people are talking about race, racial profiling, and the blatant targeting of police towards the black youth of America. There is a flurry of white people who are now faced with a very publicized example of the depths of injustice, and forced to think to themselves “Wow, that could be my kid, yet I am white so I don’t have that same problem.” This flood of empathy and compassion is meaningful, yet as a white person myself; I am surprised by how many white people are surprised by their white privilege.

I would like to think that the LA riots inspired by the release of the Rodney King tapes would have shed a spotlight on police brutality so bright there would have been major bureaucratic overhauling. That physical proof demonstrated the flagrant prejudice, and the need for intervention. Yet since that time, there have been COUNTLESS instances of police shooting black men because they had a wallet, candy bar, or phone in their hand. Some of these stories, like Amadou Diallo or Trayvon Martin get mainstream press, but it is only when people take to the streets in rebellion that white America is like “Whoa, I guess police killing black people really is a problem.”

Yet being white is not going to save you from the police state America is becoming. The black population may have been the first to suffer from this transitioning, but get ready White America – because you are going to be just as impacted. There is a naivety in assuming that whiteness will save you from an ever-growing corruption and militarization of the police force.

There are over 50,000 SWAT team raids in America Annually – that is more than 100 every day! Modern officers are groomed to be more like soldiers than neighborly protectors. The pentagon has given over $500 million worth of equipment to the police, and Homeland Security has granted over $35 billion in grants. 13,000 agencies are participating in a military recycling program. Many of America’s newly armed officers are ex-military veterans from the front lines of Iraq and Afghanistan. I don’t now about you, but I am not sure a man who was just fighting a war is best suited for the position of a police man who I hope might save my cat from being stuck up a tree. Can we just take a moment to think of how cops in England only have batons as weapons, and our cops have ½ million dollar tanks?!

It is not individual policemen who are the problem, but the culture that is being cultivated. There is a prevailing message that the American people are the enemy, not citizens who need to be safeguarded. The drone invasion of American air space, internal check points, stop and searches, uncalled for strip searches, the prison industrial complex (which includes half of the prison population incarcerated for non violent crimes), police officers not receiving the same jail time as citizens for the same offenses, NSA surveillance / government spying – are a all clear indicators of the mentality behind the police state.

The police in question can easily justify this behavior by insisting they are just “doing their job.” Which in many ways they are. Yet what we as the citizens must begin to question is what exactly is the “job” of the police, and why are we the targets? There is an element of complacency and blind obedience involved because ultimately we are allowing ourselves to be treated like criminals.

That is why we have to have respect for the people of Ferguson who are standing up for their rights, albeit in a complicated manner, but the intention is profound and the message is clear. No! We have had enough of this treatment. They are braver than me, because currently I am not fighting back in exchange for the perceived freedoms that make it easier for me to live my life. Even though intellectually I am aware that the American public is becoming increasingly more oppressed, practically the effect still seems esoteric. Sure the NSA reads all my emails, but I allow it figuring they are bored or disinterested in my puny life. Yet that illusion of “oh well, what can I do?” is by far the most dangerous part of this police state. Many of us are too comfortable to fight back, turning away from the reality that our freedoms are increasingly being taken away. It is like we are lobsters who have been put in a pot of cold water, and are not noticing that someone has turned up the heat and soon we will boil.

It is times like this where we have to remind ourselves of this poem about the atrocity of the Holocaust, because regardless of race, you are drastically impacted by the police state America has become. 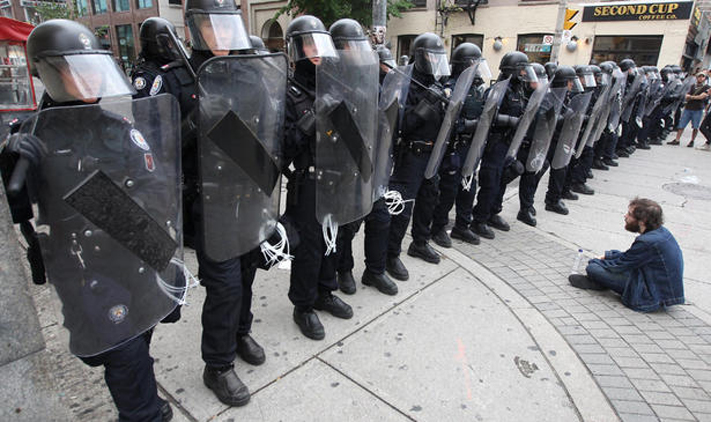 Previous post:
Can You Do Me A Favor And Not Ask For Any More Favors? Next Post:
Beauty Is A Rainbow (of hair)