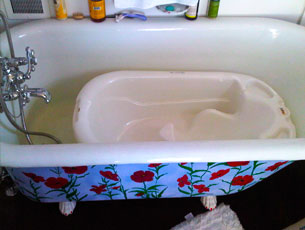 Although this may not be something you want to think about too deeply, birth cheese is really good for your baby’s skin. You know, the white shit that covers the baby when its born? Yes, that stuff. So you actually don’t want to rush to wash it off, but rather rub it in and let it seep into your babies pours. Yum! Point is, when I took bebe home, she had yet to have her first bath.

I was sitting on the bed with bebe, my mother, and my friend Grace, and we were all sweating in the excessive summer heat. My mom was holding bebe when she started to fuss. It was her first real declaration of protest, so I felt like something was definitely disturbing her.

“Ummm Mom, something is going on, maybe give her to me.”
“Oh she is fine Toni. She is just happy to be with her grandma.” I thought, “well, okay, she was a mom too, she probably knows what she is talking about,” but the fussiness only intensified.

“Okay mom… maybe give her to me. I think she is uncomfortable.” My mom rolled her eyes and handed her to me, and at that moment, the problem became painfully obvious for all involved. She had pooed. But not just any poo. A poo as black and sticky as tar… a poo that seemed as if it had been summoned from the depths of hell… a poo with a mass so impressive, it could have competed with a frat boy after a night of drinking and McDonald’s… a poo that seemed to be comprised of a substance from another dimension that had oozed all the way down her back, and into her hair.

“Holy shit! Literally! Ahhhhhhhhhhhh! We need to get her in the bath!!!!” Not sure if my new precious bebe was leaking toxic sludge, I knew that I had to get this shit of her pronto. Now I had never given a little newborn a bath before, and their bodies are so scrawny, and now my little lizard was covered in poo that rationally I did not want to touch, but practically, my hands where now immersed in.

We rushed the baby into the bathroom, and my mom ran the bath as I held the baby dripping poo onto my toes, and now very agitated. My mom, in her best intentions, had purchased a bath that was too big for bebe’s tiny body, and I, in my usual Toni way, never even examined the bath she had bought.

“This bath is too big! I can’t put her down in that! She is going to drown!”
“Oh Toni, don’t be ridiculous. Just hold her up in the bath and support her.”

I bent over and placed the baby in the water, while Grace searched for a washcloth. My mom had added soap to the water, which only made her slippery, and I thought she was going to shoot out my hands and get sucked down the drain.

“Fuck mom… I hate this bath. It’s too big. Why did you put soap in the water?? She is too wiggly and slippery! Ahhhhhhhh.”

“Oh for God’s sake Toni, just hold on to her and Grace can wipe off the poo!”
“Ahhhh Mom!! I can’t support her head at this angle! It’s gonna fall off!!”

With the help of my mom and Grace, we did get the poo that would have made Satan proud off her. We then got her dressed, and while I was still panting from the whole ordeal she was asleep again.

“Man… I am lucky you guys were here! What would I have done with out you?”

So what I learned about
1) Bebe’s first poo is pretty gnarly so watch out. That is a lot of impacted shit up in there.
2) Know about the basic equipment you are going to be using, and do a dry run. Make sure you are comfortable with the things that you have bought to take care your bebe!