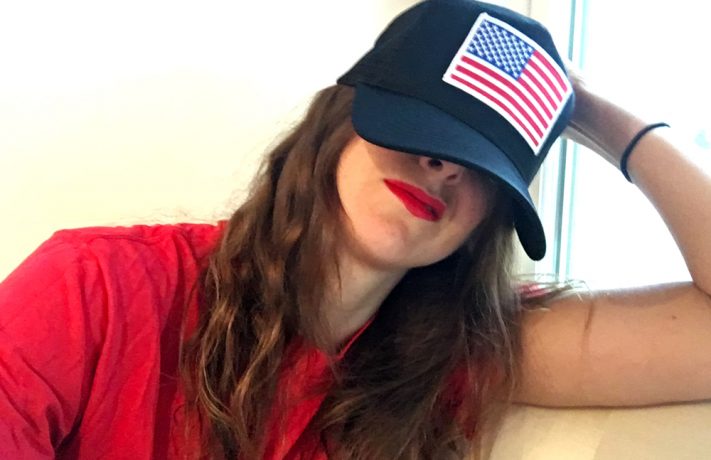 Doesn’t it feel like our country is in need of one giant AA meeting right now?? Americans Anonymous!!!

Are we collectively sucking dick for our addictions? Are we metaphorically living under a bridge selling our souls to dealers? What’s happening!? We are better than this!!!!

The themes that have dominated the conversation of our political landscape – racism, sexism, xenophobia, corruption, corporate greed, political lies, voter disenfranchisement, questioning of democracy, rape – are all microcosms of the underbelly of this country. Even though it’s painful to admit this, at least we now get the opportunity to roll over of on our backs and expose ourselves… belly in the air, genitals blowing in the wind.

Currently we have 4 psychological wars going on within our borders; gender wars, race wars, class wars, and religious wars.

What’s with all the civil wars! I don’t want this! If shit goes down lefty liberals like me are pretty much screwed. We don’t have guns! I can’t fight anyone with my witty feminist banter or new age rhetoric about how we are all connected through the quantum field. The astral plane of existence where I eat gogi berries with Ram Das won’t save me from an AK47!

We are creating false enemies with each other, and this keeps us distracted. The more we focus on attacking each other, the less we focus on how corporations are screwing us… with NO LUBE!

When we are divided, we are not fighting for our collective rights or seizing corporate America. We are instead allowing earth’s precious resources to be capitalized by big business as we stand around yelling at each other.

Part of our complexity is that because we are so diverse in America, there are going to be more opinions, ways of life, and perspectives. Yet I think we are going about things all wrong. Instead of focusing on the issues we supposedly care about, we instead direct our attention to hating everyone. If we were purely thinking about the issues, we would realize that there are ways we could be more tactical.

Lets take for example pro-life people, who often see themselves as one issues voters. They want to keep unwanted fetuses alive. What would be a good solution to that vision? Get together with gay men who want to adopt babies! Both groups have the same interest, and maybe together they could support pregnant women to go through the trauma of pregnancy, birth, and giving your kid up. United they would be able to give more to these women in a real way! If pro-life people we actually pro all life, and not anti gay, they could really work together!

There are so many potential strategic alliances that we don’t even think of! Maybe the Black Lives Matter leaders should be a part of the NRA and push more “open carry” laws. Then if all black people could just openly carry their guns, they would get shot less! Everybody wins!

Think of all these men who hate women, troll them on the Internet, and believe they are unfit to be president. Sounds like those dudes need to get laid! So let’s get them together with feminists who are fighting for legalizing prostitution so it is safer for women to practice sex work. These men will then blow their loads more often, redirect their testosterone, and sex workers could be protected under the law.

Or what about the people who want to deport all the undocumented people in this country, and build giant walls at our borders. They blame immigrants for “taking our jobs,” and “destroying the country.” Well, the undocumented workers aren’t in a great position either. The conglomerates that hire them exploit them exactly because of their “illegal” status. So what’s the solution? Bring these two groups together to force big companies to bring industry back to America rather than outsourcing it to other countries where their people work in slave like conditions. Then there would be more jobs for Americans, and the undocumented workers could get their damn documents because we would need the extra hands to re-build the infrastructure.

If we actually collaborated over the issues we cared about, we would be so effective! Right wing men want less government, and left wing women want less government too… in their uteruses! If Germany can make a train that creates zero emissions and farts out water then don’t you think this country can’t get its head of its ass and not destroy the planet?

We live in a place where people very often vote against their own interests. There are poor whites that think voting for Trump is their best option, ignoring the fact that his polices and tax proposals are not in their favor. His plan for health care is to pay your own damn health bills! Good one Donald! You get it! Then there rich whites who would benefit from Trump’s policies and tax plans that would NEVER vote for him. What interesting psychologies these people have! They need to have tea and talk about why they vote against their own interests and what visions they are trying to preserve!

Is what we want for this country really that different if we take away the sexism, racism, and extreme wealth inequality? Okay fine maybe there are Christian fundamentalists who are actively waiting for Armageddon and are looking forward to the rest of us burning in hell – but if we were all in hell together, it kinda sounds like an okay party?