4 Reasons Why Monsanto Can Go Screw Itself 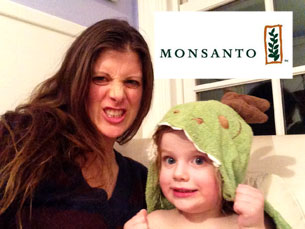 The Monsanto Protection Act passed through congress, and came out as a wet stinky fart on the other end.  This means that GMO seeds are protected from any litigation involving health risks.  That is strange right? If you were confident in the product you are forcing down the throats of billions of people world wide, then why would you be concerned about lawsuits involving health risks?

Monsanto and the government have been in bed for many administrations, doing very naughty things- probably involving butt plugs and choking.  There has been a revolving door between Monsanto, the FDA, and the court system (including Clarence Thomas of The Supreme Court) that has helped allow Monsanto to have a monopoly on our entire food system.  Monsanto’s contribution to countless campaigns has solidified their position, and time and time again the government will protect them over the welfare of the people and the planet.

As a parent, not only would I rather feed my kid organic bear barf than GMOs, I genuinely fear a future that continues to allow one company to have unregulated endless control over such a vital resource.

So Monsanto, as far as I am concerned, you can go fuck yourself – and here are my reasons why.

Because of this seed patenting, 250,000 Indian farmers have killed themselves because of inflated prices of seeds and faulty crops that force them into bankruptcy.  (As a result of Monsanto’s intrusion on India’s traditional and sustainable farming practices, 60% of the population, 1 billion people, are dependent on their GMO agriculture).

2)  The strategy of Monsanto is to create one seed that can be mass produced in one location, which has created mono-crop agriculture.  So when you drive cross-country, 1/3 of the time you will be staring at corn and soy fields – making you wish the Children of the Corn will emerge and eat your eyeballs.  Because there are these massive fields with one crop created from one seed, they are very susceptible to pests, hence the creation of pesticides.

Hey! You want to know something fun about pesticides?  A lot of them are made from Agent Orange.  Yeah! That stuff we used as chemical warfare in the Vietnam War.  Monsanto created Agent Orange, had a bunch left over after the war, then discovered the perfect market for it.  Our food!  (PS… it is also contaminating the world’s water supply… but who needs non-poisionous food and water right?)

3) Lets say you have an organic farm next to a farm that has Monsanto GMO seeds.  There is something called wind right?  If the wind blows, and some of the GMO pollen contaminates your crops, Monsanto can sue you for using their seeds without paying for it.  So not only would your food be polluted with GMO dust, but you are going to have to pay for it as well!  And if you were to try and sue Monsanto for infecting your crops, you will lose!

4)  I almost forgot about soil erosion.  This basically means that after a few years of GMO farming and the aggressive use of pesticides, the soil is FUCKED.  And because nature is crafty, super weeds then form that are resistant pesticides!   That is kind of awesome nature, but at the same time, thousands of acres have been abandoned in the south because they became impossible to farm on.

I know the Monsanto propaganda says that we NEED GMO’s to feed the world, but that is not true.  Governments create artificial shortages by throwing food away.  Kind of like how the diamond industry keeps diamonds in storage out of the public market so the demand is greater than the supply.  But in the case, when the demand for food is greater than the supply people die of starvation.  Starvation and extreme poverty is not an environmental necessity, but a political choice.  It is about access to food, resources, and land.  Who ever controls the food source controls the world.

I don’t know about you guys, but I eat food every day.  I know buying organic is annoyingly expensive, but think of it this way – until the 1940’s the whole world ate organic all the time.  Because that was all there was.  Just regular food.  But since Agribusiness dominates the market, small organic farms can’t compete.  The reason why actual organically farmed food is so expensive is because what most people are eating isn’t really food.  It is a science experiment – and we are the guinea pigs.

So take that Monsanto! 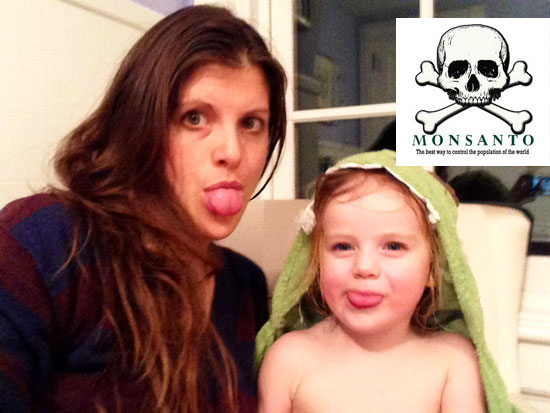