You’re Better Than Me! 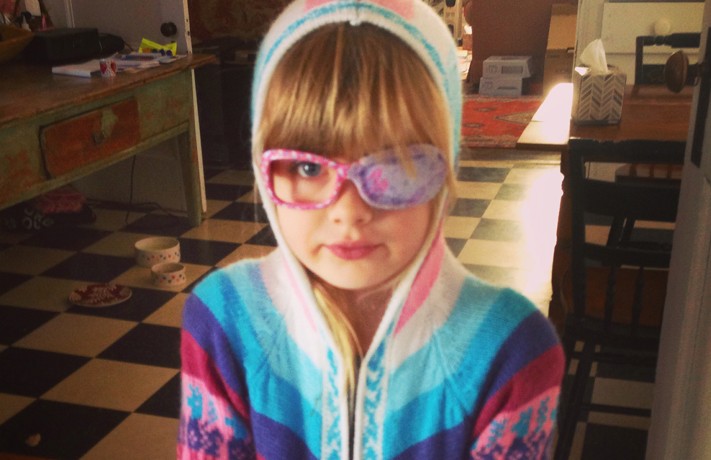 My kid and I don’t really have a lot of the same interests. We have some things in common. We both really enjoy loud music, cookies, and fart jokes. We also both think it’s hilarious when you’re spitting phlegm out the car window, and said phlegm flies right back into your face. But in terms of things we like to do to pass the time, we’re very different.

The Munch for one loves to play “hide and seek.” Maybe that would be fun if I was on acid, in a mansion, and the walls were made of Playdough. But playing “hide and seek” in my house where I know every possible hiding space isn’t exactly mentally stimulating. Especially because half the time I can obviously see her – because she SUCKS at “hide and seek!” So then I have to walk past her, PRETENDING I can’t find her like a fool. That game is really more of a time for me to look at my phone while crouched in the closet.

Then there are the “make believe” games The Munch LOVES to play. There is something so inspiring about watching your kid lose themselves in a world of their own creation. I find myself awestruck by her authenticity – as she plays pretend with her toys, and explores her imagination. The Munch gets really into it too. She uses different voices for each of the characters, and develops incredibly intricate plotlines. Nothing is more peaceful than relaxing in the living room while eavesdropping as The Munch plays sweetly. I can just sit back and listen to her deepest thoughts as one of her character says, “my mom killed my sister Becka, but that’s okay because she didn’t even know her letters.”

But I can’t play pretend with The Munch! I don’t have that capacity any more. I am a grown up, and I use my imagination to stress out about my future and have anxiety about my past.

Finding things to do together that we BOTH enjoy equally isn’t always easy. She is not that interested in talking about Donald Trump’s ties to the lizard Elite, and I don’t give a flying fuck in a rolling doughnut about My Little Pony.

Munch: I’m bored! I wanna play with you!
Toni: Do you want to play the Congress is corrupt?
Munch: NO! Too predictable! Can we play kittens on a pirate ship?
Toni: How about we draw together instead?

Now let’s be clear about something. I cannot draw. I cannot create a depth of field. I can’t draw people. I can’t shade. I have no ability to draw anything beyond two-dimensional shapes. So I decided I would just do that – and color them in pretty.

At first everything was going fine. My friend Natalya came over, and drew with us for a while as well. It was kind of an adorable scene – us all drawing together and drinking tea. After Natalya left The Munch and I continued to draw – sure it had been almost 3 hours at this point, but I was pretty OCD and NEEDED to finish my picture.

Munch: You’re star is better than mine.
Toni: Drawing a star is tricky. Do you want me to show you how?
Munch: Okay.
Toni: This is how I learned. You draw an upside down “v” like this. Then you bring one line over here, the other over there, and then you connect them!

The Munch practiced with me, drawing a star with lines that ran through the center.

Munch: But your star doesn’t have lines through it.
Toni: That’s true. But it took me a long time to draw a star with no lines through it. I started with the lines until I got better.
Munch: I wanna draw my star with NO LINES!
Toni: Okay… give it a try.

The Munch tried, and was having an increasingly difficult time.

Munch: AHHHHHHHHHHHH! I CAN’T DRAW A STAR WITH NO LINES!!!!!
Toni: Munch, you don’t need to get so worked up. The way you get better at something is to practice! You just have to keep trying. You will get it!
Munch: BUT YOUR STAR IS BETTER THAN MINE!!!!!!!!
Toni: That is because I have been practicing drawing stars for 30 years.
Munch: YOU DRAW BETTER THAN ME!!!!
Toni: Dude, if I didn’t draw better than a five-year old, you should be seriously worried about me.
Munch: BUT I WANT TO BE ABLE TO DRAW A STAR AND I CAN’T AND YOU DRAW BETTER THAN ME!
Toni: Munch, Natalya draws better than me.
Munch: NO she doesn’t! Her “space cat” doesn’t even look like a cat!
Toni: That’s because it’s a “space cat” with boobs! Not a regular cat! And she is a wayyyyyyyy better at drawing than me. Do you want to know why?
Munch: Why?
Toni: Because she practices! She works hard and drawing, and that’s how she got to be so talented.
Munch: BUT I WANT TO BE ABLE TO DRAW A STAR AS GOOD AS YOU!
Toni: Dude, this is the thing. How I draw a star has nothing to do with you. We have to be able to happy for other people and their accomplishments, even when we are struggling with our own feelings of insecurity. I can think Natalya is a better drawer than me, feel jealous about her skills, but at the same STILL be happy for her! In fact, my feeling happy for Natalya for working so hard means that I don’t even feel jealous anymore. My feelings of happiness for her are more pronounced than my feelings of jealousy. So I can instead focus on working hard and practicing, while being happy for my friend that I love.
Munch: BUT I DON’T WANT TO PRACTICE! I WANT TO BE ABLE TO DRAW A STAR JUST LIKE YOU NOW!!!
Toni: Munch, you can’t be so goal oriented about your art. That’s not the point of creating! You have to enjoy the process.
Munch: AHHHHHHHHHHHHHH!!!!!!

The Munch stormed off and left me to my coloring. Which I of course continued because I was ALMOST DONE! I had to finish it okay!?

Since then we’ve had a few meltdowns about drawing – always the same theme. The Munch eventually gets upset because she can’t do something perfectly – then traveling down a rage spiral while comparing herself to me and feeling inadequate. But that doesn’t mean I am going to not draw my best because I have coloring to accomplish okay!!?

But I realized that everything I said to The Munch about her drawing, I could apply to myself. I am SUPER goal oriented when it comes to my art. I have expectations of how I want things to be received, or turn out – and when they don’t I feel just like her. I get disappointed, frustrated, insecure, and yell belligerently at the wall.

It made me think that maybe The Munch’s angst about her art is merely a reflection of my own. That she is just picking up on my vibes, and reflecting them back to me. It made me wonder how much of my energy is unconsciously infiltrating her consciousness, and perhaps most of her psychosis is really just my own stress being mirrored back to me.

Now if you’ll excuse me, I have some coloring to get back to. 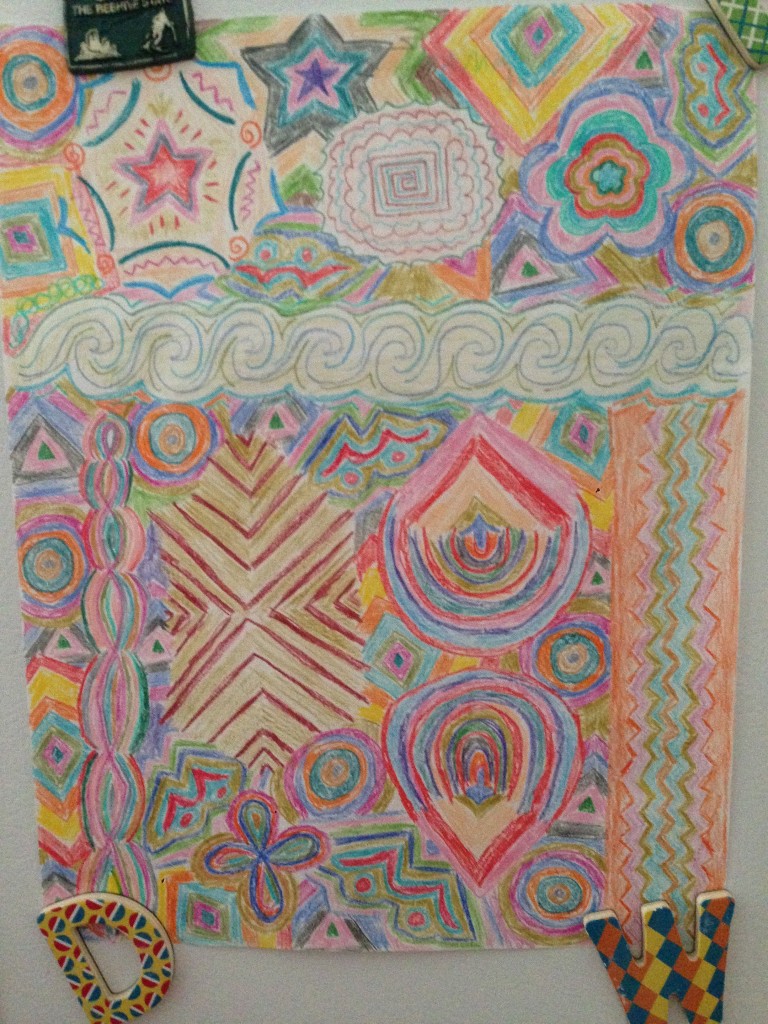 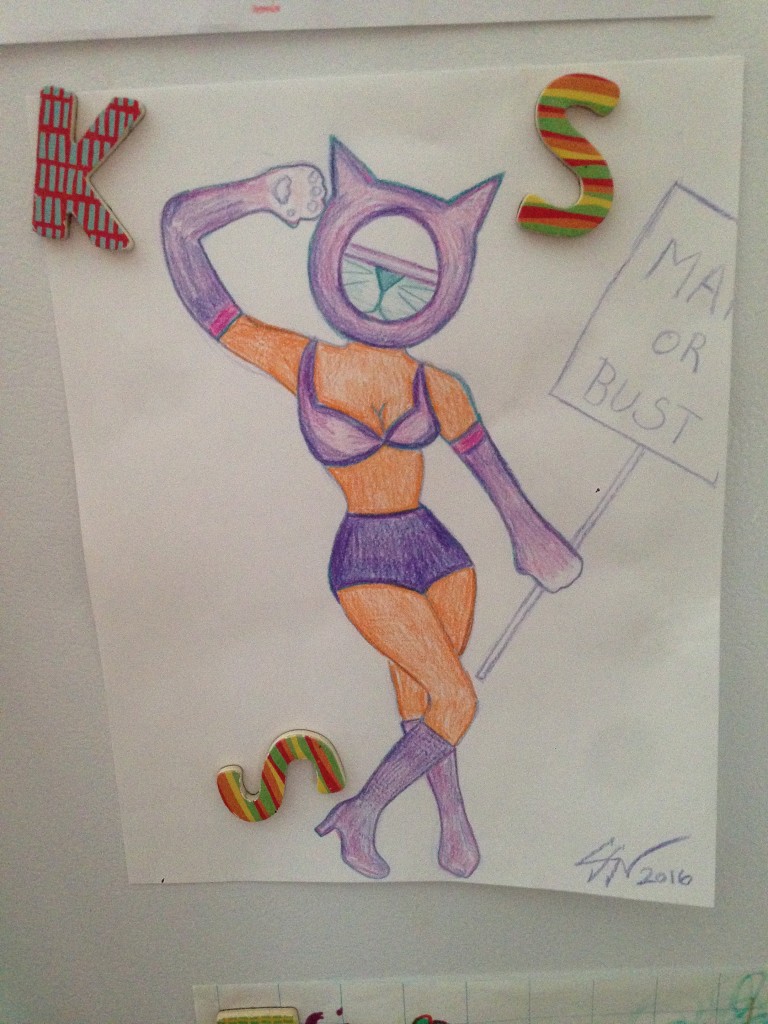 This only took me 5 hours 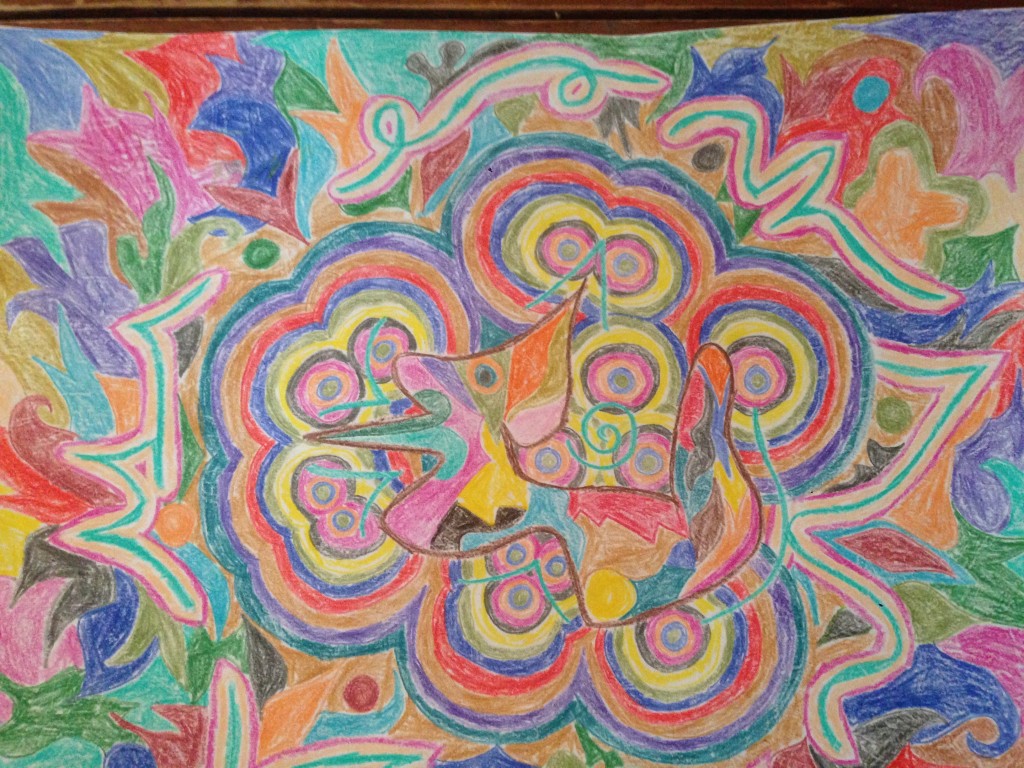 Previous post:
It Turns Out My Vagina is Not More Important Than Social Justice Next Post:
I Spend Most of My Time With You Trying To Avoid You