Why Donald Trump Will Never Be President 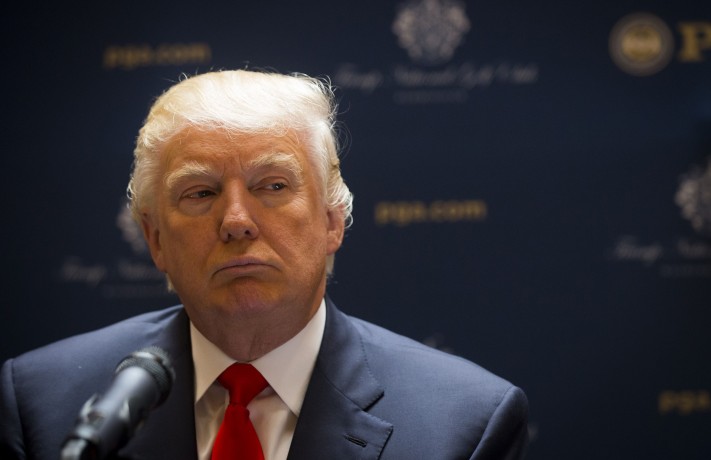 There is no way Donald Trump is going to be president. I am willing to bet my left labia on it. Not the right, because I’m a liberal.

I truly believe the reason why Donald Trump is currently getting so much attention, and may even become the republican nominee, is because he is a pawn to placate the extreme right. There have been some pretty major social shifts in the Obama administration, and even though it wasn’t the “change” a hyper progressive conspiracy theorist like me would have wanted to see (ie a total dismantling of Wall Street replaced by a globally organized gift economy predicated on the trading of solely biodynamic goods and services) there still have been some pretty major developments.

The thing about American politics is that people are excessively passionate about issues that aren’t political. Everyone has an opinion about abortion rights and gay marriage, but pretty sure most people don’t have much to say about the Federal Reserve’s impact on our banking system. The boring details of our government and how sanctions in Iran actually affect you are often not discussed. It is not like the national conversation centers around the truth that if everyone was deeply involved in their local political structure, they could potentially enact drastic national policy. That would be too complicated! So instead we fight about anal sex and the harvesting of baby parts because EVERYONE has something to say about that.

The extreme right is angry, confused, and afraid. The social developments are intimidating, and that makes them feel insecure. When people feel backed into a corner and threatened – they act out. It is a strategy to protect oneself and preserve whatever it is they’re holding onto. The extreme right needs to feel like the government is still on their side in order for the illusion of democracy to hold true.

I say illusion because we don’t live in a state ruled by the people – corporations and corporate interests govern us. It’s beyond oligarchy. We live in a “corporatetocracy.” Yet if we were to admit this, it would undermine the US global rhetoric that we invade other countries to spread democracy like a venereal disease – when our real motive is to pillage their resources and employ our companies.

America isn’t a country – it’s a business. And let me tell you, the CEO’s of brand USA know that Donald Trump would be bad advertising. The ruling lizard elite (or whoever, no judgment here) are all well aware that in order for the US to continue it’s covert imperialism, we have to keep the brand intact.

Donald Trump serves the agenda of pacifying the extreme right, but he would be an awful product ambassador for this country. The New World Order knows this! The US needs to seduce the global community in order to manipulate them into buying our merchandise. The exportation of Hollywood, fashion, technology, “freedom,” “progress,” all capture the imagination of those that want to believe in the land of opportunity. The true leaders of this country know our actual dependency on immigrants, yet they will allow Trump to publically shame them just to satisfy the stupidity of the citizens. It’s all a show.

Donald Trump can’t be president because in the global stratosphere he is so obviously a joke. But America needs his voice right now because he does contribute to the schizophrenic identity of the American people. On the one hand we are one of the most socially tolerant countries on the planet, and on the other, we are just as archaic as Saudi Arabia. There are still very conservative old world thinkers in this country, and they are mixed up in a place where Caitlyn Jenner wins a woman of the year award. This schism is hard to mend because social and religious beliefs are way more engrained than political understanding.

This election is the manifestation of the current cultural division in this country, and how emotionally bipolar we are as a nation. If we are looking at a Trump vs Clinton showdown, then I think it is pretty clear that what we are watching is not our votes at work, but our feelings at play. The more authentic representatives of the right and left are swept away like insignificant pests because they don’t fan the flame of the display. Trump and Clinton are the stars because their narrative serves the game and will keep people distracted from asking the real questions – like seriously, who are the lizard elite and what do they want!?

(PS Even though I don’t fear Trump in the White house, that doesn’t mean his speech hate crimes and racist rhetoric – which the media has legitimized – isn’t detrimental).