When I was a teenager I would come home from school, put on really sad music, and cry. Just to drive this point home and make sure you have the visual… every day for four years I would blast Fiona Apple, Tori Amos, Alanis Morissette, Sarah McLachlan, and *insert any 90’s angst- ridden singer songwriter here – just to make myself weep FOR HOURS! When I look back at that time in my life I have to wonder what the fuck was going on with me?

The obvious answer is I was a hormonal mess, controlled by the insanity of estrogen pumping through my system at an alarming rate as it surged through my veins. Yet at the same time it was deeper than that. It was the one part of my day where I actually felt alive. For whatever reason, being a teenage girl made it possible for me to easily access my sorrow. It didn’t take much for me to feel infinitely sorry for myself, or even for all of humanity. I could tap into grief with a calm effortlessness, and access that intensity more than any other emotion.

I didn’t know how to make myself feel boundlessly joyful, but I did know how to drop into sadness. Even though the melancholy didn’t feel good, the extremeness of the sentiment was full of vitality. The heightened sense gave meaning to everything, even if the moment was blurred by my salty vision.

I don’t suggest this as a daily practice – unless I can get a book deal, in which case sign up for my 3-week course “Weep Your Way Into a Better You,” – but I do think there is something profound about releasing into the chaos of desperation. Perhaps if we were more willing to feel the truth of the lows, there would be more room for the altitude of the highs.

Pain is also terrifying. I don’t want to feel hurt, nor do I want to see other people suffering. I once saw a cat that had been run over and was lying on the side of the road. I stopped to help it, but I didn’t have the capacity to handle how much the poor creature was in agony. Another car stopped right after me, and the driver went right over to the mangled animal and held it in her arms as it died. I had so much respect for this woman. She was able to bear the burden of this being’s transition when I was rendered impotent by my own excessive empathy. I felt so deeply for the cat that I couldn’t be there for it because I was too lost in my own feelings. I would like to think that if that woman hah never showed up I would have pulled myself together, and been more proactive then sobbing uncontrollably. Yet I am so grateful that she did, because she was there for us both that night.

I was once part of a hippy new age shaman ceremony celebrating the descendants of grandmother moon, and go figure, I was actually feeling pretty good. Then this woman started writhing in discomfort as her primal cries filled the room. I found myself totally distracted by what was going on with her. As much as I wanted to help, I also knew that there wasn’t much I could do for her. She was on her trip. The best way for me to have been there for her was to visualize her as the perfect self. Yet it was so challenging not to get caught up in the drama of her experience. I had to repeat the mantra “this is her healing” in order to maintain my own sanity.

Even though I felt terrible for this woman, I also wanted her to stop being in pain – not only for herself, but for me too. Her anguish was harshing my mellow! I felt so guilty that I was feeling fine, and she wasn’t.

Isn’t that a metaphor for the global suffering that is going on all the time? When you are having the best night of your life, someone else is having the worst night of theirs. That is why it is so hard to really contemplate about all terrible realities going on. I feel awful when I really allow myself to think about child brides, therefore I don’t want to think about it. It is too hard for me to be happy when I remind myself of the millions who are not.

So that is why we all need to unleash our inner teenage girl, and allow the totality of suffering to pass through us. Not only for ourselves, but also for all the beings on this fucked up planet we live on. To run from the hurt doesn’t mean it goes away. Maybe the best thing we can do is to truly turn towards it, so we can actually deal with how much it all sucks.
(Look at me! I am on the verge of tears just sitting around xmas eve when I was 14) 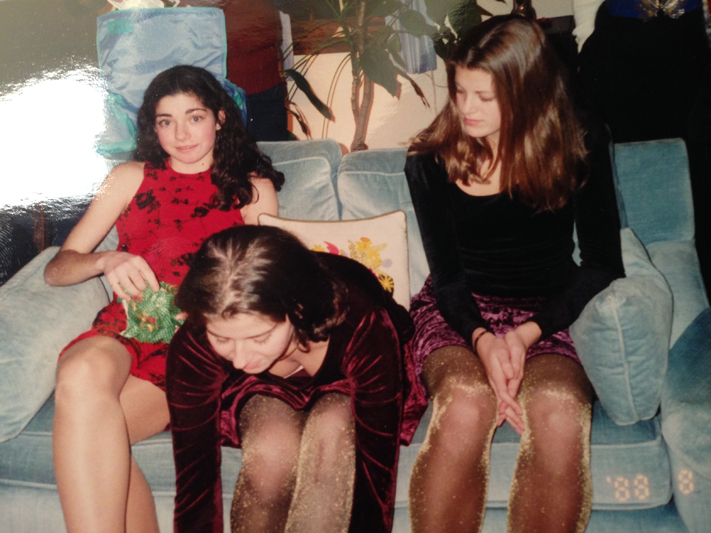