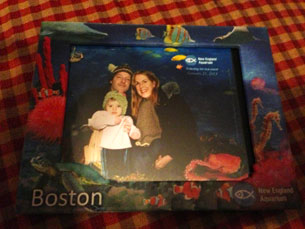 So let me set the stage for this event.  I went to Boston for the night, and the next day my mom and brother brought The Munch to the aquarium while I took a yoga class.  Since this was such a lovely gesture on their part, I offered to drive my brother home to Cambridge on my way back North.  We decided that I would drop him off at the gas station two blocks from his house so I could easily get back on the highway, yet it was at said gas station where the incident occurred.

Toni: “Okay great! And thanks again for bringing Munch! She had so much fun!”

Brother Laszlo: “Maybe you should get some gas since you are already at a station?”

Brother Laszlo: “Why don’t we do this, I will pump the gas for you.”

Again, a lovely gesture! I am a lady after all.  But here is where things get a little complicated.  My brother doesn’t drive… so needless to say he doesn’t have vast experience in the field of automobiles.  I know this about him, but was moved by this kind offer.

So we both got out of the car and I swiped my card, but the machine wouldn’t read it.  I tried again, same thing.

Third time, nothing.  So at this point we have been standing in the frigid air for over 5 minutes.

Brother Laszlo: “Maybe you go run and pay inside the station? I will wait here in case it goes through.”

I run to try to get into station, but of course it is closed and I have to run back.

Toni: “Okay, I am just going to move the car to another one of these fucking gas terminals.”

So at this point we are both a little antsy and annoyed, but trying to make the best of the 7-degree weather.

Brother Laszlo: “Hey, I think you should teach me that trick people do so you don’t have to hold the gas nozzle.”

Toni: “Yeah sure, you just have to flick this thing down and then it hooks on here like a kickstand.”

Brother Laszlo: “Ohhhhh I see.  Okay.  But how do you get it off when you are done?”

Toni: “I will show you when its finished.”

Since we had some time to kill, we did a little dance to show off our free hands.  At this point, I could have easily gotten back into the car because Laszlo did say he would pump the gas for me… but we were having so much fun with this aforementioned dance I decided to wait it out.

Brother Laszlo: “Oh it’s done, so I just pull up and it unhooks?”

Now this is where things get wild.  Because my brother was holding onto the gas nozzle, and had a tight grip from unlatching that hook, he must have figured he could keep holding the nozzle with that same level of intensity.  So he pulled the nozzle out of the car- still gripping on the handle -and gas continued to violently spurt out.  It hit my car with such vigor and intense pressure that it started spraying everywhere.  Laszlo quickly reacted by pointing the nozzle away from the car and directly at me.  And then we just looked at each other in total shock; his hand still exerting the same pressure as gasoline showered my entire body.  It is like we got into a tragic gasoline fight, yet he was the only one armed with gasoline.

Quite a few seconds go by and neither of us can register the proper mode of action.  For me to get out of the way of the violent spray, and for my brother to let go of his grip.  Eventually both these things did happen, but not until I was soaking wet.

Brother Laszlo: “I didn’t realize it would keep spurting gas after the machine clicked signifying its completion.”

Brother Laszlo: “Maybe you should come to my house and borrow some of Lizzie’s clothes?”

At first I thought I would be fine, until I remembered I was covered in gasoline.

Toni: “Yeah I think you are right.”

We climbed in the car and got high on fumes for a few blocks so I could get into his house to shower, scrub the scent of gas off my skin, steal his wife’s clothes, and get back on the road with a trash bag full of soiled clothes.  And when I finally got back home after my 2-hour drive I noticed I only went through 1/8 of a tank of gas.  Fucking A. 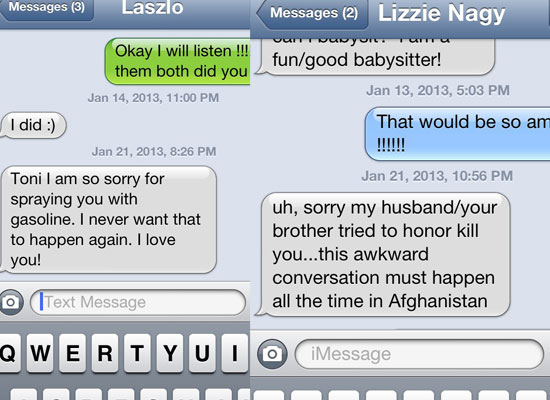 Previous post:
My Armpits Are a Political Statement Next Post:
I can’t feel my hands! Oh wait, have sex with them… now I can