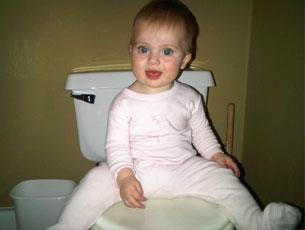 If you are eating right now, you probably don’t want to read this. This is going to be one of those posts that The Munch will resent me for when she is old enough to read, but since she can’t even tell the difference between shampoo and conditioner, I am going for it. This is the story of the painful poo.

For the first 8 months of her life, The Munch subsisted on nothing but liquid. Now I am not a scientist, but I think it is safe to say that the general consistency of what was digested, mimicked the form that was ingested. You get where I am going with this… The coffee ice cream texture that exited her, happened with relative ease. Just a slippery release, without too much struggle.

Now that she is eating some solid foods, there is more mass for her to contend with. Where once her sphincter had the lackadaisical quality of George W. Bush vacationing at the Ranch, now it has some work to do.

So the other day, I was trying to finish an article while The Munch was busy picking up her toy, throwing it just beyond her reach, and grunting until I gave it back to her. I was getting a little stressed out because I wanted to submit it by 5. Not because I had an actual deadline, but people who are still in their pajamas at 4:15 need self-imposed time constraints.

Everything seemed peaceful until The Munch started making that face. It is a face I have come to know well. Even though I do not know what you look like when you poo, if I had to pick out your face in a line up mid-poo, I would be able to no problem. Point is, there is a distinct look. Everything appeared to be coming out alright until suddenly she started to cry. Something was stuck, and believe you me, she was not happy about it.

So I picked her up, and rubbed her tummy. Didn’t really doing the trick. I let her stand which sometimes helps, although I am not sure why considering I would have a very tough time relaxing enough to poo while erect. She started to sweat, and I could tell the strain was really bothering her. Time was ticking and I was running out of ideas.

I then remembered a suggestion my friend had once told me to apply pressure to the anus to help get any stubborn poo out. She said you could do it through the diaper to avoid any traumatic memories. Okay, not a bad idea, but I am not sure that I could get a hole in one with my own anus, let alone trying to blindly find hers. So there I was, poking her butt, furthering her annoyance and igniting a frenzied look in her eyes as she batted away my hand.

“What if I feed you Munch? Maybe if you eat something it will just push out. Like a law of physics or something?” So I sat her down, started breastfeeding her, and sure enough, the sound of a healthy explosion bounced off the walls. Sigh, if only putting my boob in someone’s mouth solved everyone’s problems. 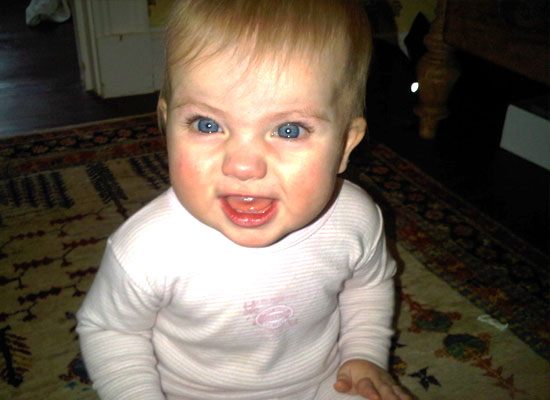