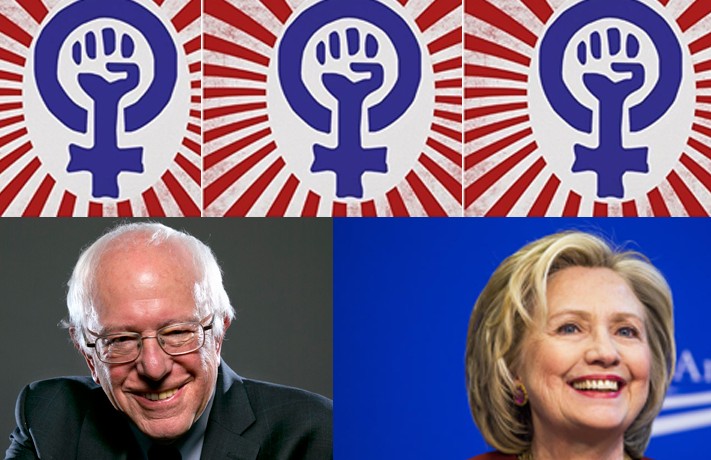 I am a proud feminist. I celebrate the sacred feminine every full moon with a menses ritual. I say things like “smash the patriarchy” non-ironically at dinner parties. I named my dog after Simone De Beauvoir. And I’m pretty sure if you typed in the word “vagina” in the search engine of this blog – 4 to 6 million posts would come up.

But just because I’m a feminist, doesn’t mean that I am going to blindly support Hillary for president.

I want to. Oh goddess do I want do I want to. Sweet Mother Gaia would that be divine. But as much as my uterus craves more women in positions of power, that doesn’t mean I can only think with my ovaries.

Hillary Clinton, Grandmother Moon bless her, is unfortunately a compromised individual. Anyone who WANTS to be president is.

Hillary has wanted to be president for a long time. At least for 8 years – but I think you and I both know this ambition dates longer than that. Maybe Hillary has wanted to be president for 20 years, or even 30. What that means is that much of her political policy has been dictated with this nagging concept in the back of her mind. “How will this decision impact the possibility of me one day being elected president?”

As a consequence of this aspiration, Hillary has been pandering to the center. She hasn’t been particularly progressive because she has been too calculated in her decision-making. If you look at her record she has promoted Fracking, supported the Wall Street bail out, supported the invasion in Iraq, supported the Patriot Act, supports the death penalty, supported the defense marriage act, she’s in bed with Monsanto, has a Wall Street funded Super PAC, and is part of the 1%.

She’s been playing the game of politics.

I am not sure I believe her choices are a reflection of her actual morality, but rather a desire to rise through the ranks of power. From a personal perspective I can say, “you go girl,” because she has become one of the most powerful women in the world. But that doesn’t mean that I trust her.

Yes Hillary has faced challenges that her male counterparts have not. Yes she has been criticized by the media, and the public, in ways that are exclusive to the fact that she has the wrong genitals. Yes there is a vast discrepancy when it comes to men and women in politics. YES TO ALL THAT! YES THAT NEEDS TO CHANGE!

But if you look at Hillary’s political history, being a woman hasn’t hurt her. It’s helped her. Her status quo run of the mill policies wouldn’t stand out of if she were a man. The only reason why a true leftist would even CONSIDER her as candidate is because she is a woman.

I don’t blame Hillary for being strategic throughout her career. She had no other choice. I understand that completely. Yet I don’t think electing her just to prove to the world that we can have a woman president is that meaningful. It’s a superficial statement. It wouldn’t truly impact the role of woman in American society. It’s not like just because we had a black president suddenly racism disappeared. There have been rampant acts of racism that are beyond archaic since Obama has been elected. It’s only brought it to the forefront. Sure it’s great that kids can now see a black president, or little girls could experience a woman president. But figureheads and puppets don’t change the deep systemic racism and sexism that exist in the world.

Obama or Hillary can’t solve these social issues because they had to sacrifice too much of their own political beliefs to get the position they are in. Obama had to prove that he wasn’t “too black” to be president just like Hillary has to prove she isn’t “too feminine.” If we lived in a true democracy it would be possible to be an honest politician. But we don’t. We live in a corporatetocracy. Therefore ANYONE who makes it up that ladder did so because of back door deals to satisfy the agenda of big banks and big business.

That is why Plato fantasized about the idea of the “philosopher king.” In his worldview, the philosopher, the one who values questioning over personal power, is the only person fit to be king. They are the only ones who can’t be corrupted. Yet the issue is that no philosopher would ever want to be king.

Anyone who has the goal of being president of the United States of America has done some very dirty transactions to get to that position. EVERYONE.

So this brings us to Bernie Sanders. Now I’m not saying that Bernie is perfect, or that I agree with everything that comes out of his mouth. But I’m pretty sure Bernie is just as surprised as everyone else by how close he is to being nominated.

Because Bernie hasn’t spent his entire political career with the goal to one day be president, he has spoken out in a much more progressive and potentially honest way. Bernie may not be the perfect candidate, but what he has done is radically changed the conversation. He is a rebellion against Wall Street. He is the continuation of the Occupy movement. He’s trying to dismantle the very banking system that supports Hillary. He’s the only candidate that has the freedom to say, “the 1% are fucking us” because he is not in their back pocket.

Bernie will inevitably have more political integrity because he is beholden to the people, not the corporations.

Of course the congress and senate are going to cock block anyone who tries to enact truly progressive political progress, but that is the direction our country needs to be heading. Not only socially, but environmentally, and financially. The current corruption is too dangerous. Wall Street is too dangerous. This model of profit over people and the planet is KILLING US ALL.

So as much as my vagina wants a woman president, my brain wants someone who is more interested in challenging the system than catering to it.

Previous post:
I Spend Most of My Time With You Trying To Avoid You Next Post:
My Life is Totally Meaningless… NBD