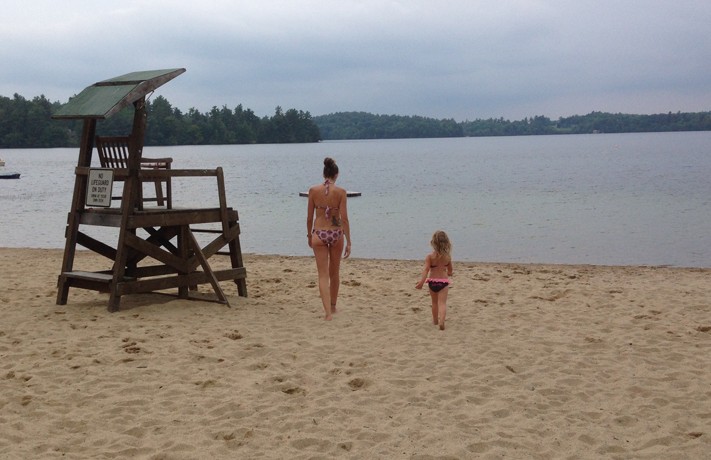 Okay. So I totally fucked up. But it’s not totally my fault. It is also nature’s fault… and global warming… and all the politicians/corporations/bankers who are ass fucking the planet. But I guess it is also my fault too.

This is what happened. I live on a lake. It is a beautiful clean mountain lake. I have always thought it was a magical, healing, energetically pure body of water. It never occurred to me to doubt its virtue. The other day my baby sitter, Lilliana, brought The Munch to the beach to go swimming and was told not to go in because of bacteria contaminating the water. When Lilliana texted me this information I was like, “what the holy dick hole. I don’t believe this shit. I have never heard of this in my life. NEVER in 30 years on this lake have I been told not to swim because of bacteria! That is some serious yuppie bullshit!!”

I just didn’t believe the hype, and quite arrogantly considering I did ZERO research on the subject. Had I just taken… oh… I don’t know… 3 minutes on the Internet all my questions would have been solved. But NO! I was NOT going to be told that I couldn’t swim in the damn lake I have been swimming in my whole damn life.

Okay so this is where shit got bad. Later that afternoon when I went to pick up Munch she mentioned our plan to go swimming that we had made earlier that morning before this whole debacle.

Toni: Do you think we should care about the bacteria in the water?
Munch: Nope.
Toni: Cool. I am going to trust you because you have the wisdom of a 4-year old. Forget the fact that I am an adult who can and should research potentially dangerous situations. Lets do this because you, my child, say its cool.

And we drove straight to the bacteria filled beach.

Okay, so here is a little context. For one… august has been cold as fuck. New England weather already sucks, and our summer has been uncharacteristically short. It didn’t get warm enough to swim until July, and then we had a serious cold rainy front for most of August. Essentially we got dicked out of summer and our only swimming time. After days and days of crappy weather, it was finally a nice day to swim. To not go because of some cryptic threat seemed ludicrous.

Then next influence is my overall denial of drastic changes in the environment. I know they exist – but I don’t want to actually believe it. I see all those kids wearing sun shirts to protect their skin from the hole in the ozone, but I keep going back to the fact that I never wore sunscreen when I was a child… so what is the big deal? It is this stubborn renouncing of obvious truths because to admit reality is too painful. Yeah maybe when I was a kid the lake wasn’t contaminated, but that doesn’t mean it isn’t now.
Here is another element of the equation that maybe is less nature’s problem and more mine. I felt SUPER guilty about how much I have been working all summer, and wasn’t feeling like I spent enough time doing stuff outside with Munch. The fact that the season was almost over, made me feel like I didn’t appreciate it. The months went by so fast, and I spent an ample of amount of time inside working trying to make something out of my life. It was this crippling realization that my relentless ambition kept me from enjoying the fleeting warm months with my child.

The last contributing factor to this scene is the “Holly” in me. You see, my mom –Holly- has a very particular approach to life. She is they type of woman who has mustard from the 80’s that she will put in your sandwich – ignoring the fact it expired 15 years ago – and rationalize eating it because fermentation or whatever. She has fed me rice with maggots unknowingly cooked in, because hey protein. She doesn’t measure when she cooks because measuring is for pussies. She let me ride in the back of a pick up truck because you know, safety is for weak. My mom just doesn’t give a fuck. She operates on her own frequency, and her attitude has obviously impacted my psychology.

So being told I couldn’t swim because of some stupid bacteria seemed absurd! Forget the fact that NO ONE was at the lake. Never mind the water was eerily still and I could see the algae floating on the surface. Munch and I went anyway, had a wonderful swim, and watched the sunset.

The next morning The Munch felt a little off. Her throat hurt, her tummy was cramping, but she seemed to pull through after breakfast so I totally forgot about it.

Later that afternoon we again went to the beach. I assumed whatever silly little water thing HAD to be cleared up by now because it was all so ridiculous any way. Buuuuuut…. yet again it was closed. Yet this time though, there was a GIANT sign explaining what was going on with the water. So yeah…. I spend a moment looking it up, and it turns any contact with this bacteria can make you sick as fuck – including skin rashes, fever, sore throats, and stomach problems.

After I read that, I couldn’t help but feel sick myself. I couldn’t tell if it was in my paranoid head, or it was because I HAD BEEN SWIMMING IN BACTERIA FILLED WATER LIKE AN OVERCONFIDENT FOOL! 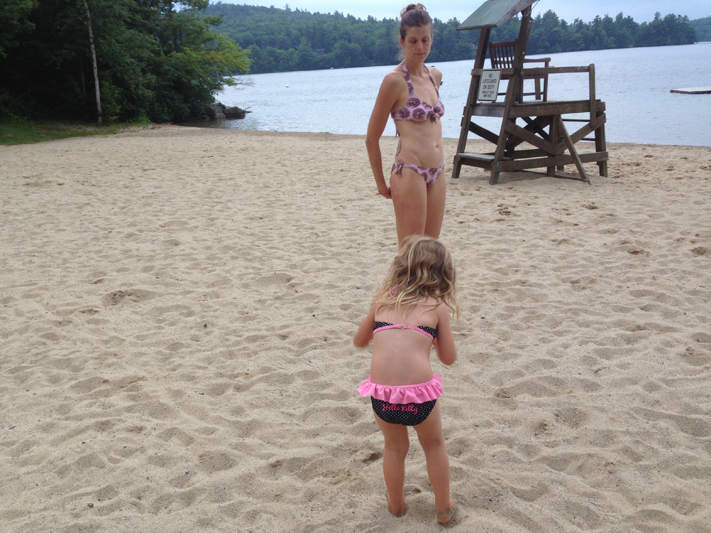 Previous post:
Here You go Sweetie… Eat this Tapeworm for Your Fat Ass Next Post:
Does Always Wanting More Make you An Addict?