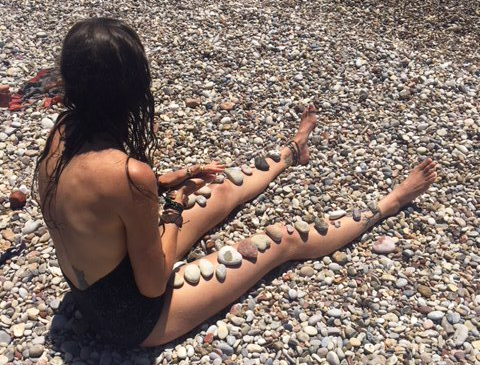 There is nothing quite like crawling into bed, closing your tired eyes, allowing your breath to deepen, and then just as you’re about to drift off into a sweet slumber snuggled inside the encompassing embrace of Morpheus… you instead start thinking about everything you’ve ever regretted about your life coupled with enervating anxiety about your future. I love when that happens!!! As a life-long insomniac this is often my process in going to sleep, and it’s EXACTLY as fun as it sounds. Something about trying to lose consciousness makes me instead consciously obsess about all that’s wrong with me which then transmutes to all that’s wrong with the world. So relaxing!

I just got back from vacation, and during that time I was sharing a room with The Munch. Her method for settling down into slumber was to toss and turn in bed as if she were training for a breakdancing marathon. Go figure, but it’s really hard to sleep when someone next to you is engaged in a head-spin. The sounds of sheets rustling against her flailing body eroded my psyche and disturbed any chance I had in settling my soul. With every grand gesture she made, I fell further into the abyss of my own self-loathing. I began stressing about my career and overall lack of financial success. I then started feeling inadequate for all my political impotency. This lead to my being consumed by a deep sensation of dread for everything that was to come in not only my life, but in the future of humanity as well. Stories of the horrific news swirled through my synapses. It was a Kafkaesque nightmare of my own making, and my daughter’s thrashing punctuated my every concern as if she were mocking my anguish with rustling fabric.

Toni: Munch, I’m having a really hard time trying to fall asleep and it doesn’t help with all that wiggling you’re doing! It’s actually really loud. Can you stop moving around so much?
Munch: I just can’t stop thinking about sea glass?
Toni: What?
Munch: I just keep imagining giant pieces of sea glass. In my imagination, I go to pick up a piece of sea glass and just the small corner is poking out, but when I pull it, I realize it’s actually a GIANT piece of sea glass. I just can’t stop imagining that. That’s why I’m wiggling.

The beauty of her thoughts compared to mine.

As an adult it’s impossible for me not to envy the purity of a child’s imagination. A brain that hasn’t been burdened by social programming and conditioning… YET. This still malleable mind of the innocent that thinks beyond the confines of civilization. I was inspired by The Munch’s mental meandering about sea glass and equally lost in self-pity. To live in my mind feels like being trapped in Dostoevsky novel while also inside a Russian prison. Yet to live in The Munch’s mind is like experiencing a perpetual episode of Pee Wee’s Playhouse on acid. Her perception of existence feels unattainable for me to achieve because the corruption of culture has infiltrated my sense of reality. I can’t fathom the relief of a mind that focuses so deeply on the joy of finding GIANT pieces of sea glass that it kept me up at night.

Yet this lack of imagination, of creativity, of seeing how the world could be different, is exactly why we are watching the demise of this country. As annoying as it is to have my kid keep me up at night, at least my kid is fucking with me and not being ripped from my arms by the US government!

If you have my mental sensibility, chances are the world depresses the fuck out of you. The news overwhelms you. You fear for the future of not only your own life, but what is going to happen to mankind and the animals we are forcing into extinction. Sure, the planet will continue, yet I can’t help but want life to as well. Call me a romantic, but I like life. I think it’s nifty. It would be a real bummer if human beings annihilated it with their selfish greed. I don’t think this is the way things have to be. I think we are stuck in our programming and need a major reboot of how we configure everything. We need a lot more imagination when it comes to solving our political troubles. For example, the solution to this so-called immigration “problem” is not baby prisons. Let’s actually re-imagine how we structure society and get rid of borders.

I don’t understand why this is such an outlandish proposition. We already live in a global society. Our media is global. Our communication is global. Our trade is global. Why are we holding onto borders? What do they accomplish? Having borders means we have war. Having borders means we have EVIL anti-immigration tactics. Having borders means we have nationalism that promotes racist ideologies. What do borders accomplish that are good for humanity as a whole? Borders don’t even reflect the truth of how we interact. Borders are a colonialist structure that benefits those in power. Borders are a way to perpetuate capitalist corruption. Borders serve zero purpose to the suffering, and clearly only have value for those in power. Why can’t we instead develop a system that supports and admits our interconnectedness? What are we holding onto by maintaining this antiquated arrangement?

I want to see a political platform that is thinking on these levels. That wants to truly eradicate the infrastructure that’s designed for the rich to oppress the poor. Only then will I have a night where I can maybe think about sea glass instead of traumatized children.

To be fair munch is right, sea glass is pretty epic. 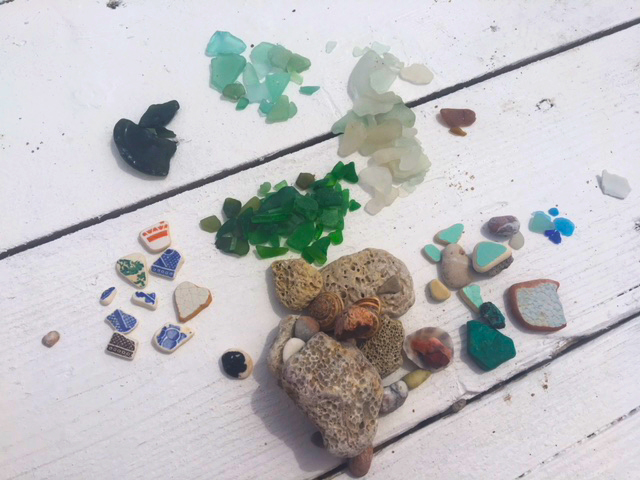 Previous post:
The Meditation of The Mundane Moving Me Through My Mania Next Post:
Mushroom’s Mental Meanderings