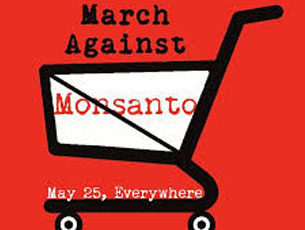 On May 25th a mass protest is being organized against Monsanto.  I do not necessarily believe that protesting alone can change policy in this day and age, yet I do think that it is worth our time to do whatever we can to express our discontent with corporate plutocracy.  If anything it is at least an opportunity to better network with each other.

We need to be as proactive as possible to an impact on how our food system works.  It is important to organize and educate each other, as well as deeply investigate the companies that are feeding us.  Right now, the best form of activism is being hyper aware of how you spend your money, and not supporting companies that are contaminating the land and their product.

People are very impassioned when it comes to this issue, and there are many different ways to analyze information.  But no matter what your opinion on GMO’s and pesticides… whether you seem them as problematic or necessary… here are two ideas worth chewing on.

Do you remember Russia… you know, the country we were at war with for WORLD POWER? Yeah, well they haven’t gone away – even if we did break up their empire.  Recently the president of Russia met with John Kerry and he is pretty pissed.

“President Putin’s meeting this past week with US Secretary of State John Kerry reveal the Russian leaders “extreme outrage” over the Obama regimes continued protection of global seed and plant bio-genetic giants Syngenta and Monsanto in the face of a growing “bee apocalypse” that the Kremlin warns “will most certainly” lead to world war… At the center of this dispute between Russia and the US, this MNRE report says, is the “undisputed evidence” that a class of neuro-active insecticides chemically related to nicotine, known as neonicotinoids, are destroying our planets bee population, and which if left unchecked could destroy our world’s ability to grow enough food to feed its population.”

I don’t know about you, but a world war sounds terrifying.  Especially one that is based on corporate greed and a refusal to adapt their business model.  I am not saying Monsanto can’t make money.  Make all the money you want Monsanto.  Have it all.  But maybe not murder the bees while you are doing it?

I think we all know how important bees are to our food system, and the rest of the world seems pretty concerned that they are all dying.  And if all the bees die what are our options? To get children to pollinate the flowers with their tiny fingers?

The other thing worth thinking about is that Monsanto impacts the entire world’s food system.  That is too much power for any one company to have over the most precious resource on the planet.  You could have more money than god, but if you are hungry and thirsty you are going to be in a bad mood, and eventually die.  Food is vital.  Our food system needs to be governed by a collective effort, not ruled by a dictatorship.

There are many things we can argue about when it comes to geopolitical issues, but can’t we all agree that we don’t want to die in a world war, and that eating is important?

I am inspired by the fact that Monsanto has already been removed from Austria, Bulgaria, Germany, Greece, Hungary, Ireland, Japan, Luxembourg, Madeira, New Zealand, Peru, South Australia, Russia, France, and Switzerland.  It gives me hope that we can do it here too. 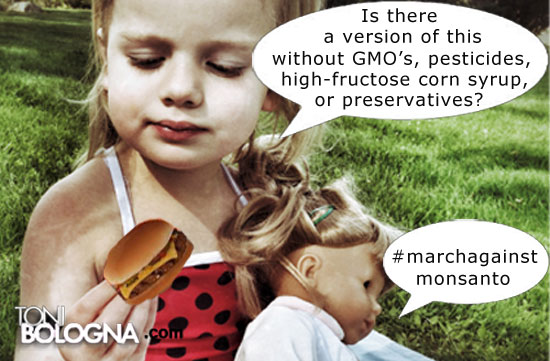 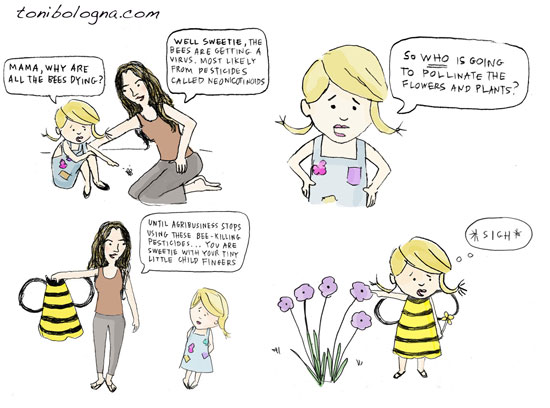 Previous post:
Lying Your Way Out of Trouble… Or into Trouble Next Post:
What Do you Pray For?