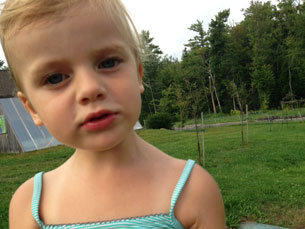 The other day The Munch wanted to run through the sprinklers wearing her green-stripped bikini that my mom had bought for her.  I had never put it on her before, and noticed that the bottom was string bikini that tied on the sides.  The first thing I thought was “Jesus mom, this shit is scandalous!” But the Munch said “look Mamma, it is like a diaper the way you have to put it on me,” so already you can see we were coming from two very different places.  Her perspective was one born from total innocence, and mine through the lens of our over sexualized semi-perverted culture.

As the Munch was running through the sprinkler, I was taking her picture because it was a precious scene.  My darling little girl was doing a classically childish act that I felt was worthy of capturing for all of eternity. But as I was looking at the pictures I couldn’t help but notice that some of her poses were sexy!  It was seriously traumatizing!

Of course Munch wasn’t trying to be sexy, nor was she doing anything purposefully.  The idea that a child can look sexy is because an adult is attributing that quality to them.  I saw The Munch as sexy, she didn’t see herself that way.  The grown up clothes made an impact that I wasn’t prepared for.  But I was the one who let her wear the string bikini, and my observations are primarily my own projections.  It is not as if she has ever seen a Vogue magazine to emulate what sexiness is.  Munch has been incredibly sheltered and has had very little exposure to media.  But still, these classic poses where a female has her hand on a jutting-out hip has very specific connotations.

If a man were to pose like that it wouldn’t be regarded in the same way as when a woman does it.  It is the woman’s body that betrays her.  The simple fact that she has the anatomy that she does puts her on display.    If I man were to sit on the subway with his legs apart that would be considered normal, but if a woman were to sit in the same fashion (even with pants on) it would be seen as sexual.

Even though Munch is just a child, her femaleness is still reminiscent of the woman she will become.  Simply by being a little girl who is a shadow of her future self, the qualities that we affix on women can just as easily be applied to her.  And of course I have been on a feminist spiral of horror ever since.  It is all I can think about.  In our current cultural context a woman’s body is an object of sexuality.  And being a child doesn’t make you exempt from that.

The only thing I can do for the Munch is delay as long as possible her seeing herself as a sexualized object, even if the world ultimately and inevitably will one day.  The longer I can protect her from this, the longer her childhood would be.

(I really debated showing the pictures I am talking about… but I just couldn’t!! I am still too horrified! But the bikini says it all…) 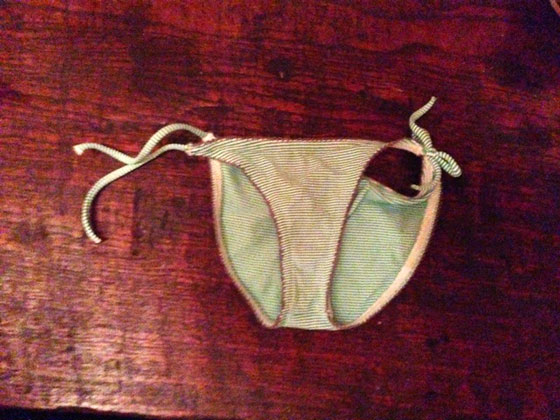