Lessons From A Love Triangle 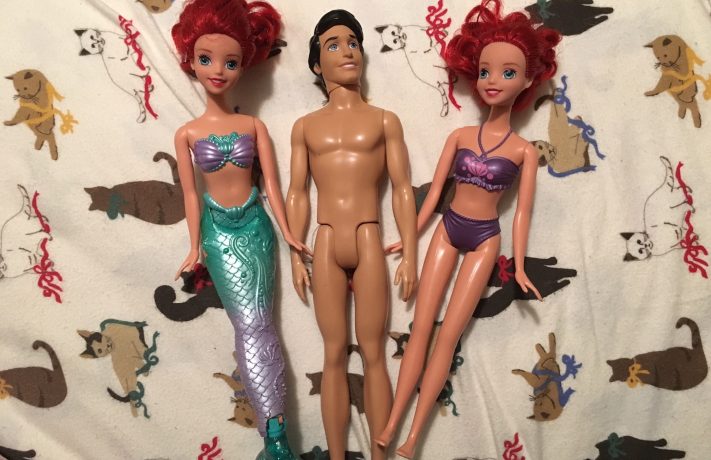 Women tell each other everything. Donald Trump’s locker room doesn’t have shit compared to the average relationship between two women. If you’re in a relationship with a women, you can bet your sweet ass that every single one of her close friends could pick out your dick in a police line up it’s been described to her in such precise detail. Her friends know if you’re munching on muff, and that you like taint tickled in the morning. I highly suggest you never look those ladies in the eyes again.

Women tend to have incredibly personal, intimate relationships with each other. They’re comfortable sharing their feelings, admitting vulnerabilities, and discussing the minutia of their lives. I’ve no joke had a friend send me a pic of her puss once, asking if a mysterious bump looked normal. Female friendships often border on therapy sessions, and definitely tow the doctor patient confidentiality line considering how much we reveal to each other.

Men however, are mostly more reserved in their relationships with other men. Where women tend to talk about themselves in their conversations, men talk more about subjects. If you were a fly on the wall listening to a bunch of chicks chatting, chances are you would here a lot about love, relationships, family, and other more personal themes. And definitely a lot about periods. Yet a gaggle of guys would discuss more abstract subjects – sports, cars, politics, current events, etc… It’s not because men don’t care about their personal lives, or women are uninterested in social issues, this is more a reflection of different cultures of communication. I’ve had many deep philosophical inquiries about societal matters with my lady friends, but those talks are not as common. Just as I am sure there are moments where a dude will open up to a friend about some problem he’s having, but that’s also a more rare occurrence.

Because of this, most hetero men don’t get into deep personal confessions with each other, and only have women to expose themselves to. This creates a dynamic where women see the weakest part of a man, and are the only ones he will reveal that part of himself to. The role of women is then defined by picking up the emotional fragments of not only each other, but also the men in their lives. Their romantic connection becomes burdened by the reality that she’s the only person he ever opens up to. He doesn’t turn to others to get advice about their relationship, or learn how to better behave – and only has her to process his feelings with. That’s a lot to ask, especially because you then expect her to blow you like a Nintendo cartridge circa 1989.

I think this way of being is doing a major disservice to all genders! We need to shake shit up!

Wouldn’t we all be happier if these ratios changed around a bit? Although I am genuinely interested in the relationship plights of my friends, I think women need more opportunities to talk out some of their shit out with dudes. We need more cross gender friendships, and for men to take on emotionally driven conversations. That way my girl can get some insider trading information about the male species – and I can get a break from hearing about how Carl is a douche nozzle so she and I can spend our energy discussing the Federal Reserve instead.

I also think male relationships would benefit if they relied on each other more emotionally. It’s said the men are some of the loneliest people because they lack genuine feelings of closeness to others. Masculinity doesn’t encourage revealing the underbelly of your emotional self, and hiding that part of you can make you feel isolated and alienated. We need to teach our men and boys to gossip like the girls of the WB.

Girls are conditioned from a young age to know how to deal with issues around relationships, and intimacy. Most media targeted to girls have subplots of love. Almost every cartoon The Munch watches has talk of boyfriends, or the characters having crushes. This pony likes that pony and wants to marry him, or this monster thinks that monster is a cutie-pie (despite the fact his body is covered in scales). Young boys, however, don’t often talk about these things with each other, and media they consume isn’t pushing these concepts down their throats. There is no ménage à trois in Transformers. Because girls are exposed to relationship drama, they start to develop an understanding of the importance around it, where with boys they lack the language to start the conversation because it’s not in their lexicon.

I was playing with Munch the other day and I couldn’t believe her emotional intelligence when it comes to matters of the heart. She’s like the ultimate wing woman. As can be seen in the below drama that was created with the Little Mermaid dolls.

Munch: Okay Mama. You will be human Ariel, and I will be mermaid Ariel.
Toni: But aren’t they the same person, just different time periods?
Munch: Ummm they are just different people now.
Toni: But both named Ariel?
Munch: Right. Human Ariel and Mermaid Ariel.
Toni: Got it.
Munch: And Human Ariel is in love with Eric. You act Eric too. But you have to make them really in love, and I better believe it.

BETTER BELIEVE IT! Okay… so my plan was to fuck with Munch a bit, and let her know what it’s actually like when your friend is in love.

Munch: Hey Human Ariel, you wanna play?
Toni: No I can’t. I’m in love with Eric, so I just want to spend time with him. I don’t really have time for you right now.
Munch: Oh. That’s okay. I totally understand.

WHAT??? That was her reaction?? To totally understand!!?

Munch: Hey Human Ariel, I made this new friend, her name is Barbie. Do you want to meet her?
Toni: No Mermaid Ariel. Like I said, I’m in love with Eric so I really don’t have time for you right now, or meeting new friends. I just want to spend time with him.
Munch. That’s okay. That happens when you’re in love. Just let me know when you’re done and ready to play.

I WAS LIKE HOLY SHIT! THIS KID REALLY KNOWS HOW TO BE A GOOD FRIEND.

Toni: Okay Mermaid Ariel. I’m bored of Eric now. I’ll meet your friend.
Munch: Hi. I’m Barbie. Sometimes I get bored of Ken too. It happens. Shall we go an adventure?

Okay… it’s official that Munch is ready to be an awesome friend when she grows up. 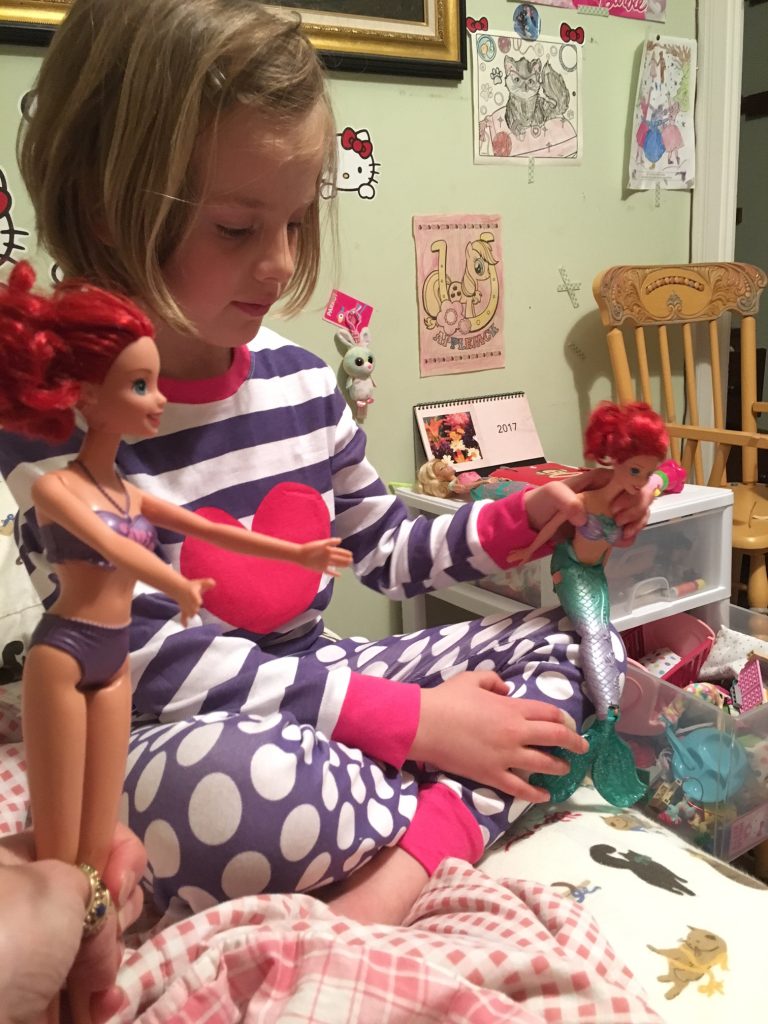