I’m Sorry I Tried to Rape You 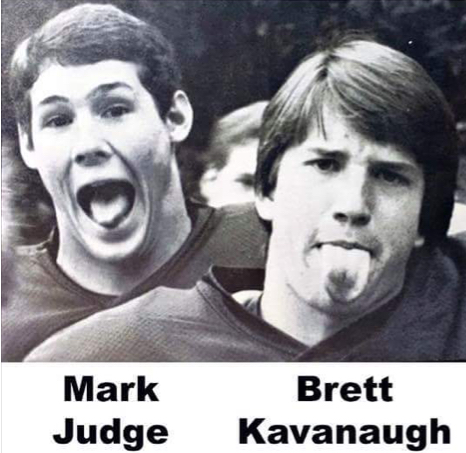 The sexual assault accusation of Brett Kavanaugh is one of nuance, and if there is one thing our American political system avoids, it’s complex thought. The media is struggling to box this story up into a black and white package, which is hard to do when a woman feels she experienced an attempted rape and the man feels like, “what?” Men like Fox news columnist Stephen Miller chalking the whole scene up to “drunk teenagers playing 7 minutes in heaven,” makes me wonder if Miller understands that HEAVEN usually doesn’t entail someone holding you down and trying to force themselves inside of you. If that’s your idea of heaven sweetie, I know a place for you to experience that… Prison!

If I look at this story from a meta perspective, it’s obvious to me why many men don’t want to classify this it as a crime. For Kavanaugh to pay the price of what he did as a 17-year old (as if that’s the ONLY time he acted this way which I highly doubt) then what kind of snowball effect would that have on other men? What are the standards of which we should hold men accountable to for assaulting women? Men don’t want to set that precedent because of the fear that too many of them will go down in flames.

Women speaking out about this situation are begging for retribution. They want to expand the definition of punishable assault because, go figure, most people don’t like to be attacked and forced to do things they don’t want to do. They want Kavanaugh to be held accountable in order for our society to have higher standards. They want a more intricate understanding of assault, because for many, even if the penis never makes it inside of you, the trauma is just as significant.

I have read countless stories of women voicing the need for us to redefine our understanding of how rape violence impacts victims, and men saying “hey honey, it’s not that big of a deal.”

Who I haven’t really heard from is the MILLIONS OF MEN THAT ARE ALSO AFFECTED BY RAPE CULTURE AND COULD PERHAPS SEE THE BIGGER PICTURE THAT RAPE CULTURE DOESN’T JUST IMPACT WOMEN WHO ARE RAPED BY ACTUALLY THE WHOLE FUCKING WORLD!

Who is the kind of guy that rapes or attempts to rape? Men who want what they want, when they want it. They want power over others. They want to show their strength. They have no concern of the consequence of their actions on other people’s lives. They prioritize their own needs over the feelings of the person they are with. These men use psychological and physical violence to get their way.

This begs the question who are these guys when they are not busy raping? I’ll tell you who they’re not – Mr. Rogers that’s for damn sure. The type of guy that is open to raping is also the type of guy that is spreading that same forceful energy in every aspect of his life. Everyone is impacted by the energy of rapey men. We need to examine how rape culture is directly destroying the planet – how rape culture is effecting the environment, business, media, politics, war, weapons, the world economy, men, women, and children. Rape culture is so insidiously ingrained in the patriarchy that it’s often hard to identify.

The micro is the macro. That’s why this current media cyclone is not just about Brett being a little too aggressive one night. It’s also about do we want this kind of man, this kind of thinker, IN CONTROL OF OUR NATIONAL LAWS? I don’t! That’s why this is important. Rape culture can’t be the prevailing foundation of which we build our lives upon, and rapists cannot continue be the ones in control of the future.

There are men out there who have raped, who have assaulted, who have pressured, and they have owned their actions. They have admitted what they did and apologized to the people involved. Beyond prison, I think what we also want is for rapists to understand the hurt they caused. For the event to change the assaulter as much as it changed the victim. If one is emotionally mature enough to acknowledge and take responsibility for the hurt they caused, then mostly likely that awareness would seep into all aspects of their life. These men are our allies too. It takes way more balls to be able to say “I’m sorry I raped you,” than it does to rape. I believe in personal evolution. I believe that people can realize the trauma they caused and have genuine remorse. I believe there is a place for them to be forgiven. Yet if you are going around raping people and then defending or denying your actions, then what else are you capable of? How else will you psychically rape the people you are around, or emotionally rape the system you have power in? I don’t want a rapist ruling this country. I don’t want rapists ruling business. I don’t want rapists in control because they don’t just rape people, they rape period.

Rather than arguing about “is this attempted rape really that bad” why don’t we instead focus on not giving power to men why try to rape. In the priesthood, in Hollywood, in politics, in business, in all these circumstances where men exploit their power over others. If we take down the rapists we take down the patriarchy. If we take down the patriarchy we will have the revolution we’ve been looking for. The change we have been craving. The desire to live life as we know is possible. If we want a paradigm shift it starts with this. If we want to reform Wall Street it starts with this. Rape is not a woman’s problem, it’s the world’s problem.