Healthcare.gov – The Plot to Drive you Clinically Insane 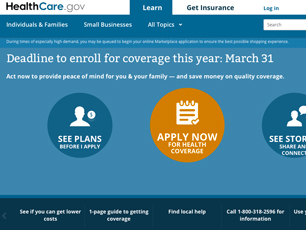 It is official.  Regardless that the idea of “affordable health care for every American,” seems like a benign mission, the healthcare.gov website was put on this planet as a means of mind control and extreme violent psychological torture.

I personally don’t even want health care.  Not because of the concept, but because no health care provider would cover the type of health strategies I use.  Like seeing a shaman for my shingles, a reiki practitioner for my repressed inner rage, or a wizard for my receding gums.

Sigh.  I guess I need health insurance if a drastic emergency was to happen.  Like if I was sucked inside a tornado, smashed into a plane while in the sky, smacked my head on a bird getting it’s beak lodged into my eye socket, then spit out onto a metal fence and impaled.  Yeah, then maybe I would want an ambulance to come and get me to a doctor who would give me a pig heart to survive.

So far my entire week has been dedicated to trying to sign up for health care on the website, and this is what happened.  Mind you, each time I called, I was on hold for at LEAST an hour and a half before I talked to an actual live person.

Now I will say that the ladies I dealt with on the healthcare.gov support hotline were really kind, patient people.  They were just as frustrated as I was, and that made me feel like we were in this together.  We would laugh about how they must do nothing but deal with angry people all day, and then we both cried a little.

At one point during this debacle I was convinced that the real conspiracy behind the health care initiative was to break people.  To destroy their spirit and stifle their will to live – therefor making sure people never needed health care because they would commit suicide by beating themselves to death with their phones while on hold, or by smashing their faces into their computer screens.

What I don’t get is how can this website be so dysfunctional! BILLIONS of people are on Facebook every day, and a couple of million can’t get through the government’s website? The same government that goes through all our texts – looking at our dick pics and emoticons?

Yet the elation I felt when that sweet Texan lady and I finally filled out my application was unparalleled.  I also have to admit, that heathcare.gov is wayyyyy more affordable than my previous situation that was anally raping me because of the “precondition” of my brain tumor.  But unless my insurance starts covering seeing a woodland troll for my back pain, or someone has the decency to throw an ax into my skull, this might be a total waste of money.

(look at the horror of this screen….. THE MADDENING HORROR…. but seriously it is way cheaper….)