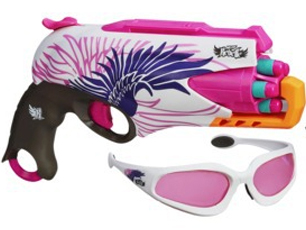 It turns out that boys aren’t the only ones being marketed to in order to propagate ideas of violence and war.  Now your little girls can get in on the action of mocking murder!  Hooray!

In this NYT article, it discusses how there is a huge financial opportunity to capitalize on by creating faux deadly toys for girls – that sparkle of course.  You know how bitches love bedazzling things.  Thanks to movies like The Hunger Games and Divergent, girls are now interested in mimicking warriors with pink weaponry.

“Toy makers have begun marketing a more aggressive line of playthings and weaponry for girls — inspired by a succession of female warrior heroes like Katniss, the Black Widow of “The Avengers,” Merida of “Brave,” and now, Tris of the book and new movie “Divergent” — even as the industry still clings to every shade of pink.

Zing’s Air Huntress bows and sling shots (Slogan: Ready. Aim. Girl Power!) account for more than a quarter of the company’s sales in a little over a year on the market. A pump-action “cheetah shooter” from the Marshmallow Fun Company is bathed in pale pink with darker spots and fires mini-marshmallows.”

For sure! Nothing says “girl power” like pretending to kill!

I haven’t seen the Hunger Games, but maybe these toy manufacturers are missing the message. I always thought it was a commentary about the Orwellian state of Big Government, not a call to arms for our youth.

Call me a pussy pacifist hippy, but maybe we don’t need to encourage war, violence, and murder with either gender?  Sure it is normal for kids to feel aggression.  We all have rage inside of us – just ask the steering wheels in our cars.  It is fine to need outlets to express anger, but why does that mean simulating battle?  Why go through these extreme measures to glorify one of the most barbaric ways we treat each other?  War isn’t a game, it is an accepted form of mutual mass murder between nations

Can’t we start developing peaceful toys so we can instead promote a world that is I don’t know… PEACEFUL?? Like a super fun Gandhi staff, or a Martin Luther King dream kit? 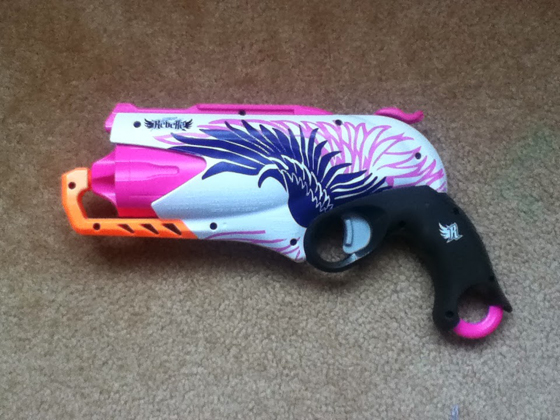 Previous post:
No Makeup Selfies for Breast Cancer Next Post:
Healthcare.gov – The Plot to Drive you Clinically Insane