Did I just do some permanent damage? 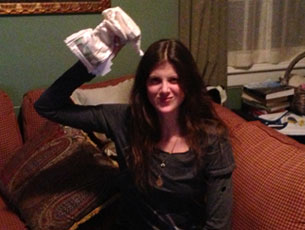 You know how certain people can really push your buttons, and sometimes their provocation makes you act out in ways you regret?  And even though there is no excuse for being immature, or letting frustration consume you, it also seems unfair to shoulder all the burden of responsibility because that person was being a dick?  But at the same time you realize that no matter how much of an asshole someone else is, you are still responsible for your own behavior and therefor can only blame yourself for your deeds? Well, this is one of these stories.

It all happened on my birthday.  Full disclaimer, I am a little testy about my birthday in general.  The 29th of December is kind of a lame time. I always get joint presents, a lot of people forget, usually friends are too busy to hang or too burnt out and gearing up for New Years, and I never got to have cupcakes in my honor at school.  If you think I am being petty, well you are right, but I think you are being petty for thinking I am petty so who is the petty one really?

But I can’t complain about my birthday this year.  I went hiking up a mountain in the snow, I danced with my friend Cyndal, I had a nice talk with my brother who I don’t often see, and an impromptu yummy dinner with my family.  In reality all was fine and I had nothing to be on edge about.

But The Munch hadn’t napped in the past 3-days, and I could tell the lack of sleep was getting to her.  Because I got back from dinner late, I wanted to give her a quick bath and get her into bed quickly so she could get some much-needed rest.  Now here is where I went wrong.  I should not have felt so stressed out about her getting to sleep and just lived life.  But for some reason, I was being obsessive and therefore rushing the whole process.

After her bath time we have this game we play where I pretend to put her diaper on over her towel.  For some reason, she thinks this is hilarious.  Hopefully her sense of humor is still developing.  But this night, I was telling her a story, so instead of doing that game I used the opportunity to slather her ass with oil and cream for it was pretty chapped.  (Since her potty training she has been going commando all day with her bum exposed to the elements of life… and of course every couch, pillow, and chair in the house but I try not to think of that).

I had gotten the diaper on, and her bum all oiled up, when The Munch realized we forgot to play the diaper game.  Now at this point, I just wanted to get her in jammas and into bed, so I explained that we would play tomorrow instead.

“NO Mamma! NOOOOOOO take my diapi off!”

“Munch, I already greased up your bum.  We will play tomorrow night I promise.  It is really late and you need to get to bed!”

She then started ripping off her diaper while I was trying to put her jamma pants on.

“Fine Munch, we can play the game okay? But you have to stop yelling in my face.”

“NOOOOOO! I WANT TO YELL IN YOUR FACE!”

At this point she was too enveloped in fury to even play the game, and too committed to her rage to just put her diaper on and move on with the night.  Every time I tried she would rip it off and scoot her but off the diaper. Now let me remind you the whole reason I wanted to leave her diaper on in the first place was because I had already put stuff on her bum to help heal her chapped ass.  Not mine… hers.  My ass is doing just fine.  And now the oil and cream had been wiped off and spread all over the floor and towel.  At this point I was so aggravated that she wouldn’t play her dumb game, she wouldn’t let me put the diaper on, had wiped her bum dry chapping it more, and was screaming obnoxiously while staring me in they eye,  that I took the diaper and threw it at her face.

Yeah…. That happened. Not very mature I know.

She just kind of looked at me for a second… and then WAILED!!!!

Now, of course you can’t throw a diaper hard.  I didn’t even whip it. I just tossed it… but at her face.

Sigh.  I can’t even tell you how guilty I felt.  Even though she was being unreasonable, I can also understand where she was coming from.  She was tired and wanted to play her stupid diaper game and laugh. The reality is no matter what, I can’t act like a two year old just because I am dealing with one.

Then I started freaking out because they always say your first memory is a traumatic one, and all I could think is that The Munch’s first memory is going to be of me throwing a diaper at her face.  I need to start saving up for therapy NOW!

I picked up The Munch and hugged her for a while.  Might I add during this hug I reapplied the oil and cream because you really can’t go around with a red chapped ass.  I got her in her diaper and jammas, and she seemed to be in a good mood again.  Even though I couldn’t shake how bad I felt, I hoped that maybe The Munch would just forget about it and all would be fine.

We cuddled and kissed and everything seemed back to normal.  I figured “She is only two right? Maybe she has the memory of a goldfish, which has a 3 second capacity.  After 3 seconds, they have no idea what just happened and life is new again.  Yeah, toddlers are a lot like goldfish. That makes sense right?” So I put her in her crib and said goodnight hoping this whole incident could be forgotten.

“Goodnight Munch.  I love you.”

“I know. I am sorry. I was really frustrated. Can you forgive me?”

Yeah… so not only did The Munch bring it up last night, but so far today she has told everyone she sees that “Mamma threw a diapi at my face!”

Pretty sure she is not letting go of this one, and there is going to be a lot of ass kissing in my future. 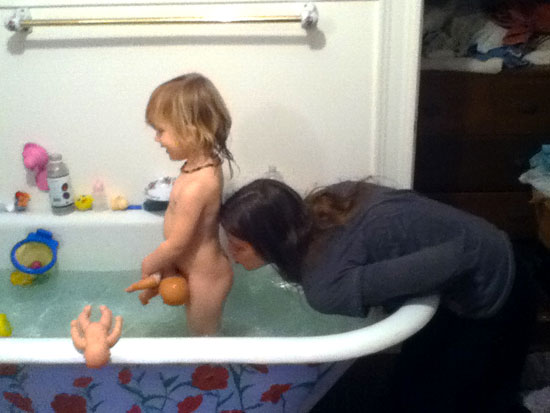 Previous post:
Hey World, Tomorrow is My Birthday Next Post:
my most epic conversations with The Munch in 2012