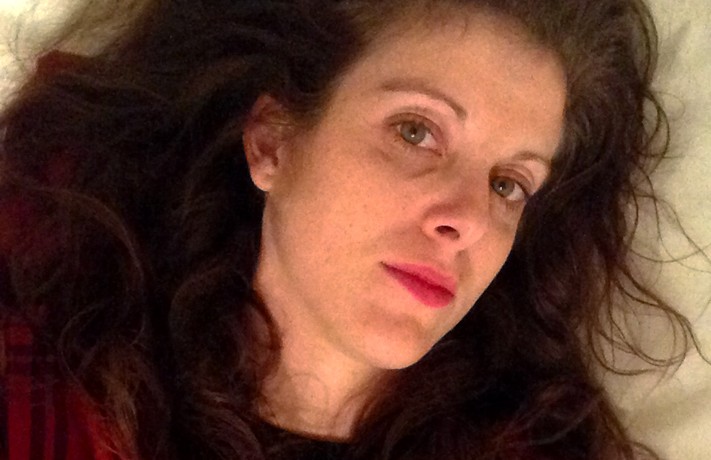 I have a lot of rejection in my life. I will work really hard on something, put it out into the world hoping someone will like it, wait patiently for their response (otherwise known as checking my email compulsively every 11 seconds), and when I finally get a reply… they will say “no.” I then have to put the pieces of my self-esteem back together like a puzzle that is NOW MISSING FUCKING PIECES BECAUSE MY EGO HAS BEEN SHATTERED!

Not everyone picks a career path where rejection is part of the process. But writing and making movies is my passion, so it doesn’t feel like a choice. I NEED to make content that will distract people from their lives – while I desperately try to make them think deeply about their lives and how they shouldn’t be so easily distracted. It’s a delicate balance.

I know everyone who’s in the dating scene also deals with rejection, but if a man weren’t into me – who cares. It’s not like you are going to be compatible with every dude you may want to mash your genitals against. When a guy has rejected me it may have hurt, but that pain was easier to move past because it’s just some dude’s opinion. I mean… it’s not like I ever made out with a boy I met at a club, found out the next day he had a girlfriend who happened to be my Facebook friend, and then proceeded to stalk them both for the next 6 months wondering why he wanted to be with her and not me. I mean that would be crazy!!

Even though I know rejection is going to be part of my path, that doesn’t make it any less soul sucking. For me it is the worst kind of rejection because my art is the deepest part of who I am. I can’t play it off and say “well that person didn’t really know the real me,” because I am exposing myself fully – maybe too fully for some.

A few years ago an editor for a publishing company contacted me saying she thought I should write a book, and to write a proposal for her. I did what she asked, and after reading it she responded “No thank you. That’s enough of that. ”

She found me only to reject me later!?

But these things happen all the time. I recently applied for something and got rejected the same day!? How did you know so you didn’t want me so quickly!?

I try to do all sorts of new age hippy visualization actualization manifestation work. I pray on the new moon, and write my intentions on the wall with period blood. I light candles and picture the future I want. I thank the universe for abundance and try to show gratitude. But I’m beginning to feel like the cosmos can suck my dick.

My most recent venture is a movie script that I wrote with my friend Bridget. It’s a comedy about a female friendship, and let me tell you, it is pretty insane. If you read it you would say to yourself “yup, she went there.”

I am working with a producer who has been helping us try to get it made, and she has been sharing her Hollywood network with us. With her help, we got the script to the actress I wanted to play the main role – Ilana Glazer from Broad City.

The producer was the one who suggested Ilana for the part, and I knew instantly she would be prefect. I love Ilana. I think she is a comedic genius, and have so much respect for her. So for the last 89 drafts of working on the script, I had Ilana in mind. I thought about her obsessively… when driving, eating, sleeping… meditating (even though I am not technically thinking, so rather I was meditating on her). I talked about her constantly, and would wonder what she would think of this scene or that.

I would have these fantasies that Ilana loved the script so much that she not only wanted to do the movie, but also wanted to be friends with Bridget and me. We would do fun friend things like braid each other’s hair and share tampons. A montage of our relationship played out in my head, and it always ended in a harmless pillow fight with lots of giggling.

Those 3 weeks that Ilana had my script were the longest of my life – and then I got an answer. She said “no.”

My heartbreak was consuming. I couldn’t say, “oh she isn’t that great anyway who cares” because she is that great. She is fucking amazing. Her type of comedy is the shit. I will never know why she said “no,” but “no” is what she said and I have to live with it. No sharing baths in our future or getting matching tattoos. I guess Ilana wants to write her own damn movie.

After the Ilana rejection I was super depressed. It was a heartbreak of epic proportions. I couldn’t move on, or think of anyone else to play this part. I would just look out my window and think of Ilana.

I had this deep melancholy I couldn’t work through. But I had one more glimmer of hope for this script. I had applied it to the Sundance Screen Writer’s Lab, and it had gotten through the first round. That meant they liked the first 15 pages, and wanted to read the rest. If I could get into Sundance – that would hopefully open up the doors I needed.

I was going to find out on December 16th – but that was also a busy day for me creatively. I had to work, had dance rehearsal, and then was going to film my friend’s rap video. I couldn’t be in a terrible mood for that, because it would be really hard to rap when someone was behind the camera crying about their failures… Just not the right vibe for hip hop.

I didn’t check my email until 12pm. I sat down took a deep breath, envisioned an acceptances letter, and looked. It was a “no.”

I felt so lost and hopeless. The sadness was starting to set in, and I was about to cry. I texted my friend Bridget and we commiserated in the dejection.

I felt like I was at a crossroads emotionally. Part of me was ready to get super fucking depressed and feel really sorry for myself. But I also just was really depressed, and felt a little bored of depressed Toni. When I’m depressed, I’m more self-absorbed. I care less about what other people are saying, because I am just waiting for my turn to talk about how bad I feel about everything. Depressed Toni is kind of egocentric.

Just as the tears were about to fall I thought of something. When I had read the list of films that were going to Sundance they were all really serious. There were movies about Civil Rights, sexual assault, autism, public executions… really heavy shit. I started picturing Bridget and myself at a roundtable where everyone was pitching their script. The person next to us would say, “My script is about a young girl who was kidnapped from her village in Uganda and then sold into the sex trade.” Everyone would nod quietly in deep contemplation. Then it would be our turn, and we would say, “Our movie has the main character getting dumped by her boyfriend while dressed in a giant penis costume, and also a pretty sweet colonic scene where years of impacted shit sprays into her mouth.”

The movie we wrote was never getting Sundance. If Sundance were to be interested in a comedy, it would be a sweet irreverent story about a boy and his goat in the mountains of Uzbekistan with beautiful cinematography. Not my crass over the top comedy that culminates in a birth scene where someone pulls out their own placenta. That is just not happening!

In a way I was totally delusional thinking what I wrote was EVER going to make it into Sundance, but that mirage at least slowed me down for a while. Where I am usually excessively manic and a workaholic, I actually relaxed for a few weeks. Even though I thought I was going wallow in misery after this rejection, I actually feel pretty energized and ready to keep trying.

I may not be where I want to be right now in my career dreams, but I think I am going to start sewing that penis costume anyway.

Look how happy he is!